One Palestinian Killed In An Accidental Explosion In Central Gaza 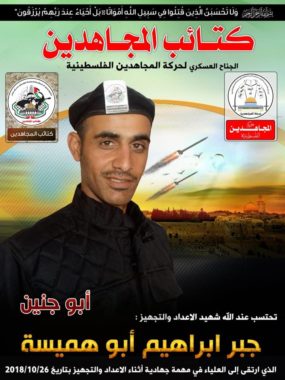 Dr. Ashraf al-Qedra, the spokesperson of the Health Ministry in Gaza, has reported that one Palestinian was killed, and another was injured, in an explosion in the al-Boreij refugee camp, in Central Gaza.

Dr. al-Qedra said the Palestinian has been identified as Jabr Ibrahim Abu Hmeisa, 27, and added that another Palestinian was injured in the same incident.

An armed group, calling itself the Mujahidin Brigades, said the Abu Hmeisa was one of its members, and that he died in an accidental explosion, without providing further details.

It is worth mentioning that Israeli soldiers killed, Friday, four Palestinians, identified as identified as Nassar Eyad Abu Tayyim, 19, Ayesh Ghassan Shaat, 23, Ahmad Sa’id Abu Libda, 22, and Mohammad Khaled Mahmoud Abdul-Nabi, 27, during the Great Return March Processions near the perimeter fence in the besieged Gaza Strip, and injured 232 others, including 180 who were shot with live fire.