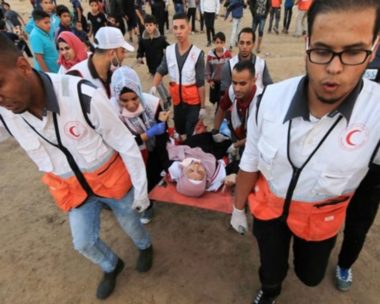 Israeli soldiers resorted, on Friday, to the excessive use of force against the Great Return March Procession in several parts of the Gaza Strip, Friday, killing four Palestinians, and injuring 232 others, including 180 who were shot with live fire.

The Palestinian Health Ministry in Gaza has reported that the soldiers shot 180 Palestinians with live fire, including one medic who was shot in his leg, and suffered a moderate injury, while helping wounded Palestinians at a make-shift clinic, east of the al-Boreij refugee camp, in central Gaza.

Eyewitnesses said that Israeli army sharpshooters, stationed in fortified posts hundreds of meters across the border fence, targeted the protesters with live fire, while the soldiers fire live rounds, in addition to dozens of high-velocity gas bombs.

Dr. Ashraf al-Qedra, the spokesperson of the Health Ministry in Gaza, said a young man, identified as Nassar Eyad Abu Tayyim, 19, was shot east of Khan Younis, in the southern part of the Gaza Strip, and died from his serious wounds at the Gaza European Hospital.

A fourth Palestinian, Mohammad Khaled Mahmoud Abdul-Nabi, 27, died at the Shifa Medical Center, from serious wounds he suffered after the soldiers shot him, east of Jabalia, in northern Gaza.

In related news, a Palestinian identified as Jabr Ibrahim Abu Hmeisa, 27, was killed and another young man was injured in what was described as an accidental explosion in the al-Boreij refugee camp, in Central Gaza.

A group calling itself the Mujahidin Brigades said the young man was killed ‚Äúduring preparation‚ÄĚ without providing further details. He was killed in a building, and was not part of the Great Return March processions.

On Friday evening, the soldiers invaded the al-Mazra‚Äôa al-Gharbiyya village, northwest of the central West Bank city of Ramallah, killed one Palestinian, identified as Othman Ahmad Ladadweh, 33, and injured dozens, including eight who were shot with live fire, while the soldiers also assaulted journalists, and shot one.