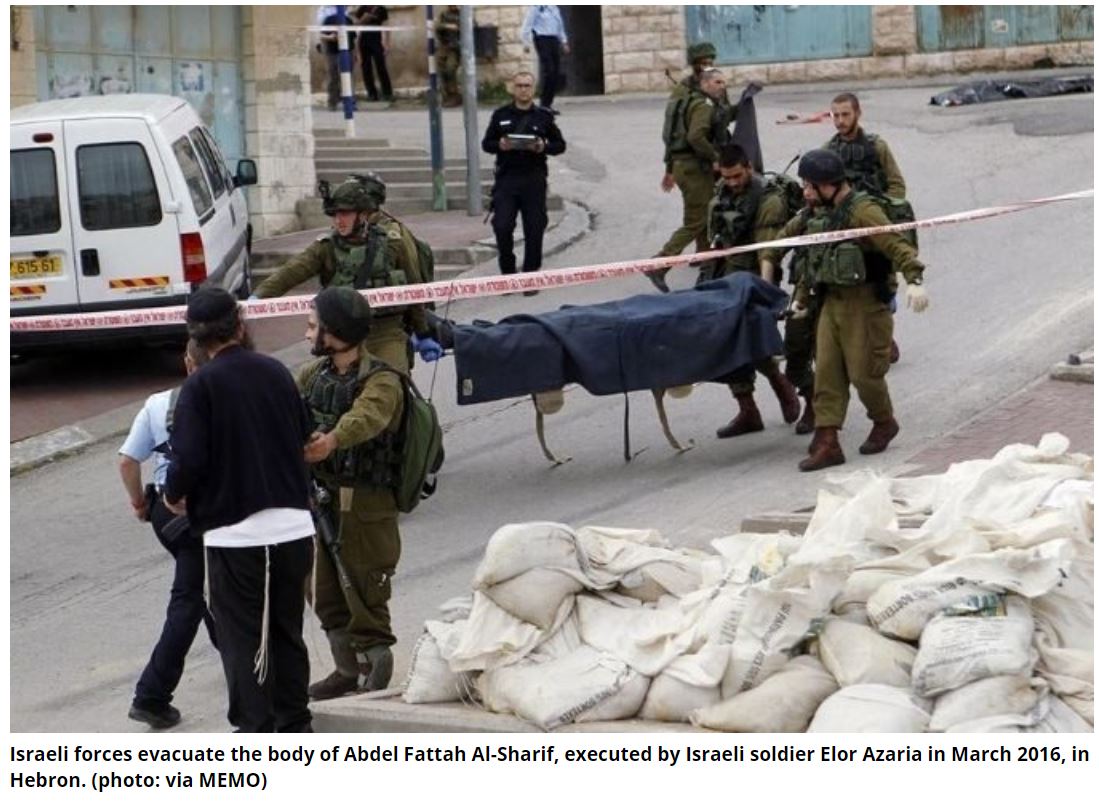  By Ramzy Baroud for Palestine Chronicle: As illegal settlers increase their attacks on Palestinian civilians in the occupied city of Al-Khalil (Hebron), the people of the Palestinian city continue to mount a campaign of popular resistance.

One of the channels of resistance is Human Rights Defenders (HRD), “a grassroots, non-partisan Palestinian organization, working to support nonviolent popular resistance through popular direct action and documentation of human rights violations committed by the occupation.”

To understand the situation in Hebron better, I spoke to Badee Dwaik, head of Human Rights Defenders; Raghad Neiroukh, a journalist, and Flora Thomas, a British solidarity activist.

The conversation included another member of HRD, Imad Abu Shamsiyah, the courageous activist who filmed the murder of a young Palestinian man, Abdul Fattah Al-Sharif.

On March 24, 2016, Israeli army medic, Elor Azaria, killed Al-Sharif in cold blood in Hebron. The Israeli army later claimed that Al-Sharif, and another Palestinian, tried to stab an Israeli soldier.

The murder was rightly dubbed an “extrajudicial execution” by human rights organisations. Under international pressure, Israel tried Azaria in court, sentencing him to 18 months’ imprisonment, but eventually released him 14 months later, to be received as a hero by many Israeli politicians, his family and ordinary people.

I asked Abu Shamsiyah about the events that took place on that day, when he had personally witnessed and filmed the execution of the young Palestinian man.

“It was about 8 o’clock in the morning and I was having coffee with my wife. I heard the sound of shooting outside, very close to my house,” Abu Shamsiyah began.

“I immediately went out to see what was going on, and my wife followed me. She brought the camera with her.”

“I found out that a person was lying in the street. He was wearing a black t-shirt and trousers.”

“I saw that there was also another person on the ground. I moved my camera to capture him on film and noticed that he was bleeding from his face.”

“I observed a few Israeli soldiers approaching one of the people on the ground; they were very close to me.”

“I realised that Abdul Fattah Al-Sharif was a Palestinian only when I saw an Israeli soldier kicking him.”

“When the Israeli soldier kicked him, Al-Sharif moved both of his legs and his hands. I captured this with my camera.”

“At that moment, my wife started shouting, saying: ‘Haram, haram,’ and tried to help the wounded young man.”

“When the soldiers heard her screams, they noticed our presence in the street. So they forced us to leave the street; they chased us away.”

“I went home but I began to think of another way to continue filming. I climbed on to the roof of a neighbour’s house and resumed filming the execution.”

“So I zoomed in the camera to capture a better image of the soldier, who [looked as if he was] slightly injured. The ambulance gave him first aid and treated him, while they denied any treatment to Al-Sharif and the other wounded Palestinian.”

“They carried the Israeli soldier into the ambulance; I zoomed in again, and he was already standing; as I said before, he was [clearly] only slightly injured.”

“The ambulance began to turn around to leave the area. It was then that I heard the sound of one of the soldiers loading his gun. He got closer and closer to where Al-Sharif was [still lying down]. When he was about one metre away, he pointed the gun at Al-Sharif’s head.”

“Al-Sharif did not pose any threat to the soldier, whose name was revealed later in the media to be Elor Azaria. It was Azaria who shot the wounded Palestinian in the head.”

“I was still filming, and one of the Jewish settlers, who noticed me, told the soldiers about me. One of the soldiers turned towards me and ordered me to leave the area, but I was already leaving because I had filmed the entire scene.”

“I immediately went to the Human Rights Defenders, where I uploaded the video and many people watched it.”

Following the incident and, throughout Azaria’s trial, Abu Shamsiyah and his family experienced a lot of harassment by the Israeli army for revealing the truth that Israel wishes to keep hidden: the brutality of its soldiers, and the intrinsic relationship between the occupation army and the illegal settlers.

Speaking to Abu Shamsiyah four years after the tragic death of Al-Sharif, the Palestinian activist remains steadfast in his belief that the ongoing Israeli human rights violations must be exposed. His voice conveys determination, not hesitation or fear.

Human Rights Defenders, like many other Palestinian groups, continues to channel and guide the popular resistance of the Palestinian people in Hebron and many towns and villages across Palestine. They are a testament to the resolve of Palestinian society – brave, steadfast and unbroken.

– Ramzy Baroud is a journalist, author and editor of Palestine Chronicle. He has authored a number of books on the Palestinian struggle including ‘The Last Earth: A Palestinian Story’. Baroud has a Ph.D. in Palestine Studies from the University of Exeter and is a Non-Resident Scholar at Orfalea Center for Global and International Studies, University of California Santa Barbara.