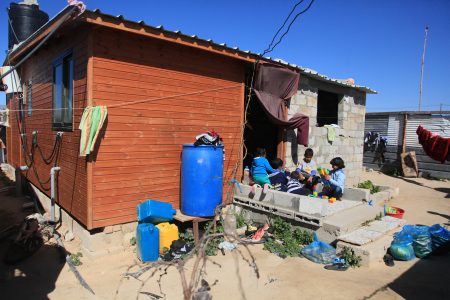 After his home was bombed by the Israeli air force, during the last aggression on blockaded Gaza, Abu Muhammad al-Sharif moved from place to place in hope of having permanent house for his seven-member  family.

Whenever Abu Muhammad became stabilized in a house, he found himself forced to leave it, either due to the mistreatment of the neighbors, or because the rent would go up and he could no longer afford to pay the expenses.

“I work as a mechanic. What I make at the end of the month does not meet the needs of my family, especially [when] I get 1000 shekels (roughly $250US) and I am responsible of two families,” Abu Muhammad told Al Ray Palestinian Media Agency.

After suffering the repeated move from one place to another, Abu Muhammad finally stabilized his two families in a small house that doesn’t quite meet their needs, but hope for better conditions.

Several Palestinian families of besieged Gaza have been facing extremely dire humanitarian and economic conditions since 2006, and especially after the recent Israeli offensive.

General Coordinator of the Palestinian Migrants Association, Hassan al-Waly, affirmed that Gaza’s planned reconstruction has all but stopped, due to the lack of finance and donations which were supposed to be provided by international donors — this in addition to the lack of construction materials, especially cement — pointing out that many families are still living in tents and caravans because of this.

Al-Waly added that the families who live in caravans are facing very severe  depression on top of a lingering fear of rodents, insects, skin diseases, cancer and rheumatism.

In 2014, Israeli occupation launched its offensive against Gaza, which lasted from July 7 to August 26, killing over 2,000 Palestinians (mostly civilians), injuring more than 11,000 others and damaging approximately 28,366 housing units.

Palestinian Minister of Housing and Public Works, Mufeed Al-Hassayna, confirmed that there has been a large deficit in the entry of construction materials into the Gaza Strip, which increases the suffering of the families whose homes were destroyed in the recent aggression.

Al-Hassayna called on the necessity of increasing the construction materials which enter the blockaded region.

In regards to the reconstruction process, the Ministry of Housing and Public Works disbursed, in collaboration with UNRWA and UNDP, 75 million dollars as rental allowance for families whose homes were completely destroyed.

The Ministry of Housing and Public Works said that it disbursed 7 million dollars, funded by Qatar, in relief and shelter for the families whose homes were completely destroyed.

The ministry added that it funded, in collaboration with the relative authorities, 6,870 housing units out of those 11,000 housing units, making a ratio of 62.5% of the homes, which were completely destroyed.

Moreover, the ministry had reportedly finished removing the rubble of the last Israeli aggression on Gaza, which amounted to some 2 million tons.

Related: 09/03/15 United Nations: Gaza Could Be Uninhabitable Within 5 Years