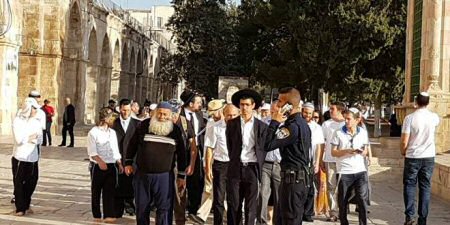 More than 300 Israeli settlers, escorted by police, broke into the al-Aqsa Mosque compound in occupied East Jerusalem on Sunday morning.

The settlers performed rituals, marking the Sukkot Jewish holiday, while Israeli police, stationed at the gates of the compound, imposed strict restrictions on the entry of Muslim worshipers to the holy site.

WAFA reported no clashes between the settlers and Muslim worshipers at the holy compound, as is usually the case when settlers break into the site.

In October of 2015, tension ran high across the West Bank, including Jerusalem, against the backdrop of Israel’s repeated assaults on the mosque, including attempts to enforce a unilateral temporal division of the Islamic holy site between Muslims and Jews.

Prior to that, the Euro Mediterranean Human Rights Monitor warned in a report that “Israeli incitement against Muslims could trigger a conflict that would likely result in disastrous consequences.”

“Among the provocative acts documented by Euro-Med researchers against Palestinians in Jerusalem were performance of Talmudic prayers near Muslim devotees, beating, throwing rubbish, cursing, death threats and preventing worshippers from reaching the mosque,” the report said.