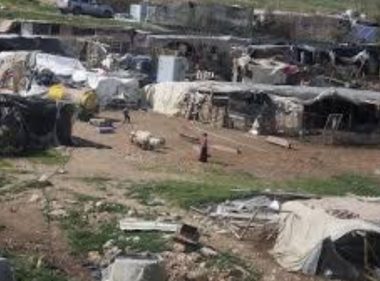 The Palestinian Presidency issued a statement, Thursday, strongly condemning a ruling by an Israeli Court allowing the displacement and the removal of an entire Palestinian Bedouin community in the al-Khan al-Ahmar area, in the Jordan Valley of the occupied West Bank.

The President’s office said the decision to remove the Bedouin Community, which resides nearly 15 kilometers to the east of Jerusalem, is part of Israel’s illegal policies of ethnically cleansing the Palestinians.

“Ethnic cleansing is one of the worst forms or racial discrimination, and apartheid. This policy has been the predominant feature that rules the practices and decisions of the Israeli government,” the P.A statement reads, “Israel uses this racist policy to uproot the Palestinians, and illegally occupy their lands to house colonialist settlers.”

It also called on the United Nations, all signatories of the Geneva Conventions, and related international institutions to act immediately, and provide the urgently needed protection to the Palestinian people, their lands and their holy sites.

It is worth mentioning that Israeli Defense Minister Avigdor Lieberman announced, Thursday, the approval for the construction of 2,500 colonialist units in the West Bank, next week, and another 1,400 to follow.

On Thursday, the Palestinian Authority slammed the Israeli decision, and said Israel’s ongoing colonialist activities in the occupied West Bank, including Jerusalem, are illegal, violate International Law and the Fourth Geneva Convention.”