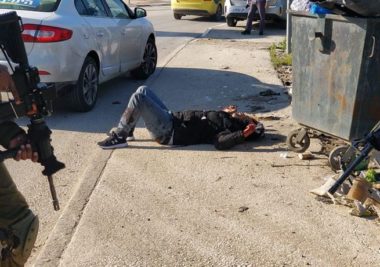 The Palestinian Foreign Ministry issued a statement, Wednesday, condemning the dangerously escalating Israeli violations and crimes, including the killing of a Palestinian near Nablus by an armed illegal colonist, and said that the “terrorist attacks carried out by the colonists are an integral part of Israel’s ongoing illegal occupation of Palestine, and its state-sponsored terrorism.”

The Ministry strongly denounced the killing of Mohammad Abdul-Fattah, 23, and the injury of Khaled Rawajba, 26, on the hands of an armed illegal fanatic Israeli colonist.

It stated that the crime, which took place near Beita town junction, south of the northern West Bank city of Nablus, and the army’s justification for this cold-blooded murder, are one of the examples of Israel’s ongoing illegal polices, and crimes against the civilian population in occupied Palestine.

In addition, the ministry also denounced Tuesday’s attack in which a group of armed illegal Israeli colonists invaded Palestinian lands in Deir Jarir village, east of Ramallah in central West Bank, before they cut and uprooted more than 550 grapevines and almond trees, while Israeli soldiers stood and watched without attempting to stop them.

It also held the Israeli government, headed by Benjamin Netanyahu, fully responsible for the escalating crimes and violations carried out by the colonists, living illegally on Palestinian lands, in direct violation of International Law and the Fourth Geneva Convention.

“Those colonists are not only heavily armed, but also receive training and support from the Israeli occupation army and the government which armed them in the first place,” the statement said, “They continue to carry crimes and serious violations against the Palestinian people, their homes, lands, property and holy sites, while Israel continues to support them on various levels, legally, economically and politically.”

The Ministry also denounced the international silence, and complicity, in these crimes and violations, and said that the world needs to realize the seriousness of the Israeli crimes against the Palestinian people, and how this silence is just encouraging Israel to continue to commit and escalate these violations, not only against the civilian population in occupied Palestine, but also against their homes, lands, holy sites and even their graveyards.

It stated that the illegal colonists have become very powerful, well-armed militias, funded and supported by the Israeli government, and other countries, especially the United States.