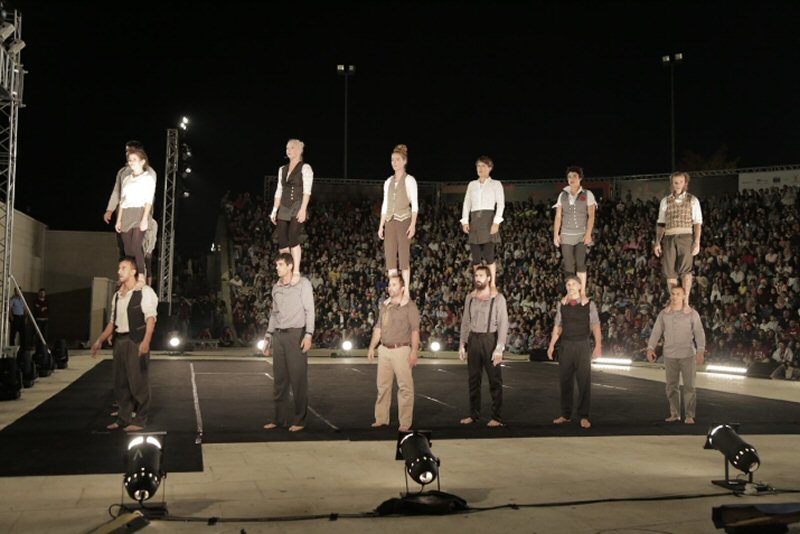 XY Company performing at the opening of the Palestine Circus Festival in Ramallah. (Photo courtesy of the Circus School)

The second edition of the Palestine Circus Festival, entitled “United for Freedom”, opened in Ramallah on Thursday, with the participation of about 200 local and international artists, according to press release.

Palestinian officials, a representative of the European Union, representatives of international and local cultural and artistic organizations, municipalities and public and private institutions, as well a large crowd, watched the opening ceremony, the Carnival and XY company show, held at the Istiklal Park.

“Circus has long been a strong tool for self-expression, entertainment and storytelling around the world. It brings all people together, whether young or old. In Palestine, the EU is proud of being one of the main supporters of the Palestine Circus: the first to exploit the great potential of Palestinian youngsters in artistic productions,” said the EU Head of Cooperation Alessandra Viezzer. “Today, we celebrate the opening of remarkable performances from Palestine and Europe. A joint European-Palestinian cultural partnership that is evident throughout. The EU believes that culture is the best vehicle for the people and their narrative. This is why we support culture in Palestine: to tell the Palestinian story,” she added, according to WAFA.

The XY Company from France impressed the audience by the wonderful opening performance that drew the smile on the faces of those who came to Istiklal Park to see its distinguished production, “It is not Yet Midnight”; a show about balance and perfection thus becomes one about imbalance and instability. With multiple perspectives and viewpoints which eschew the lowest common denominator in favor of a continuous quest for balance borne out of imbalance, XY presented an ode to precarious and imperfect humanity.

The opening event also included a daytime interactive show entitled “Petit” by the Frutillas Con Crema Company from Chile at al Bireh Cultural center, using acrobatic movements and different circus arts to encourage the audience to search for self in a small world of wishes.

The festival is organized by the Palestine Circus School in partnership with Nablus Circus School, with the support of the European Union, Consulate General of Sweden in Jerusalem, Drosos Foundation, a main sponsorship from JAWWAL, media sponsorship from Raya, advertising sponsorship from Sky for Advertisement and Public relations and event management, and in collaboration with many local and international partners.

It will continue until 6 October, with the participation of local and international circus teams from France, Britain, Chile and Argentina, and will be held in more than 32 locations in Jerusalem, Ramallah, al-Bireh, Nablus, Hebron, Bethlehem, Jenin, Tulkarm, Birzeit, Gaza and Amman.

The Palestinian Circus School (PCS) is a nonprofit organization, started in 2006 and continued to evolve into a professional institution teaching circus all year round to more than 230 children and youth of ages 6 years and above. Throughout the past 12 years, it has created eight different productions and performed for more than 108,400 people in Palestine and abroad.

Human Interest 09/20/18 Apartheid is Always Bitter! A Palestinian Appeal to Chefs to Withdraw from Round Tables in Tel Aviv