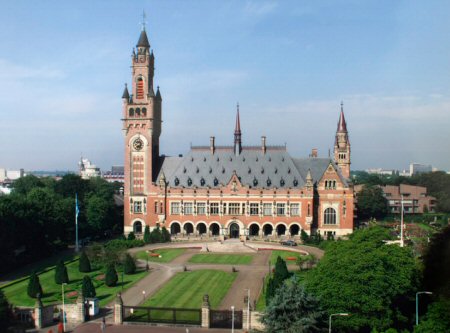 The Palestinian Minister of Foreign Affairs, Riyad al-Malki, said on Saturday that Palestine has filed a lawsuit against the United States at the International Court of Justice (ICJ), the main judicial body of the United Nations, for violating the international law by moving its embassy in Israel to occupied Jerusalem City.

Malki said, in a statement, that the case was based on Palestine’s membership in the 1961 Vienna Convention on Diplomatic Relations that defines a framework for diplomatic relations between independent countries, specifically the Optional Protocol concerning the Compulsory Settlement of Disputes.

According to the statement, the foreign ministry submitted a declaration recognizing the jurisdiction of the ICJ to settle all disputes that have been faced of may be faced as per the decision of the United Nations Security Council and the procedures and statute of the Court.

Malki said that he had sent a letter to the US State Department, last May, asking it not to move its embassy to Jerusalem because this step would violate the Vienna Convention on Diplomatic Relations and Security Council resolutions.

He pointed out that, due to the failure of the US to respond to the letter and its non-compliance with international law, it was informed in a written memorandum, dated July 4, of the existence of a legal dispute as per the rules and procedures of the ICJ.

According to Malki, with the passage of the legal period and after meeting all conditions to file a lawsuit against the US, the lawsuit has been formally filed with the ICJ’s Registrar to prosecute the United States.

The minister said, according to Ma;an News Agency, that the ICJ was asked, in the lawsuit against the US, to declare that moving the embassy to occupied Jerusalem constituted a violation of the Vienna Convention on Diplomatic Relations and to order the United States to take its diplomatic mission out of Jerusalem and comply with its international obligations in accordance with the Vienna Convention on Diplomatic Relations, as well as taking the necessary measures to comply with its obligations and refrain from taking any future steps that may violate its obligations and provide the necessary guarantees for non-repetition of its unlawful action.

Malki stressed that taking this step is an exercise of the sovereign right of the State of Palestine as a member state of the Vienna Convention on Diplomatic Relations and other related conventions, which is another legal right used by Palestine to defend its rights and interests against illegal actions and measures.

He said, expressing his belief that it is now possible to use the legal tracks that have been denied to the Palestinian people for decades, “We defend our rights and our people without hesitation and reject all forms of political and financial extortion.”

He pointed out that the State of Palestine has taken many important steps to address the recent illegal measures taken by the current US Administration, particularly with regard to Jerusalem, and the Israeli Government with respect to colonial settlements and targeting of civilians, as well as steps at the Security Council, the UN General Assembly, the Human Rights Council and now the International Criminal Court.

He added that “This step comes in line with the policy of the State of Palestine, which aims to preserve the character of the holy city of Jerusalem with its unique spiritual, religious and cultural dimensions.”

“The international community and international law have consistently rejected all attempts by Israel, the Occupying Power, to change the character and status of Jerusalem since all resolutions of the General Assembly and the Security Council have consistently affirmed that any action or decision aimed at changing the status or demographic character of Jerusalem is null and void and has no legal value.”

(photo: The Peace Palace in The Hague, Netherlands, seat of the ICJ — Wikipedia)