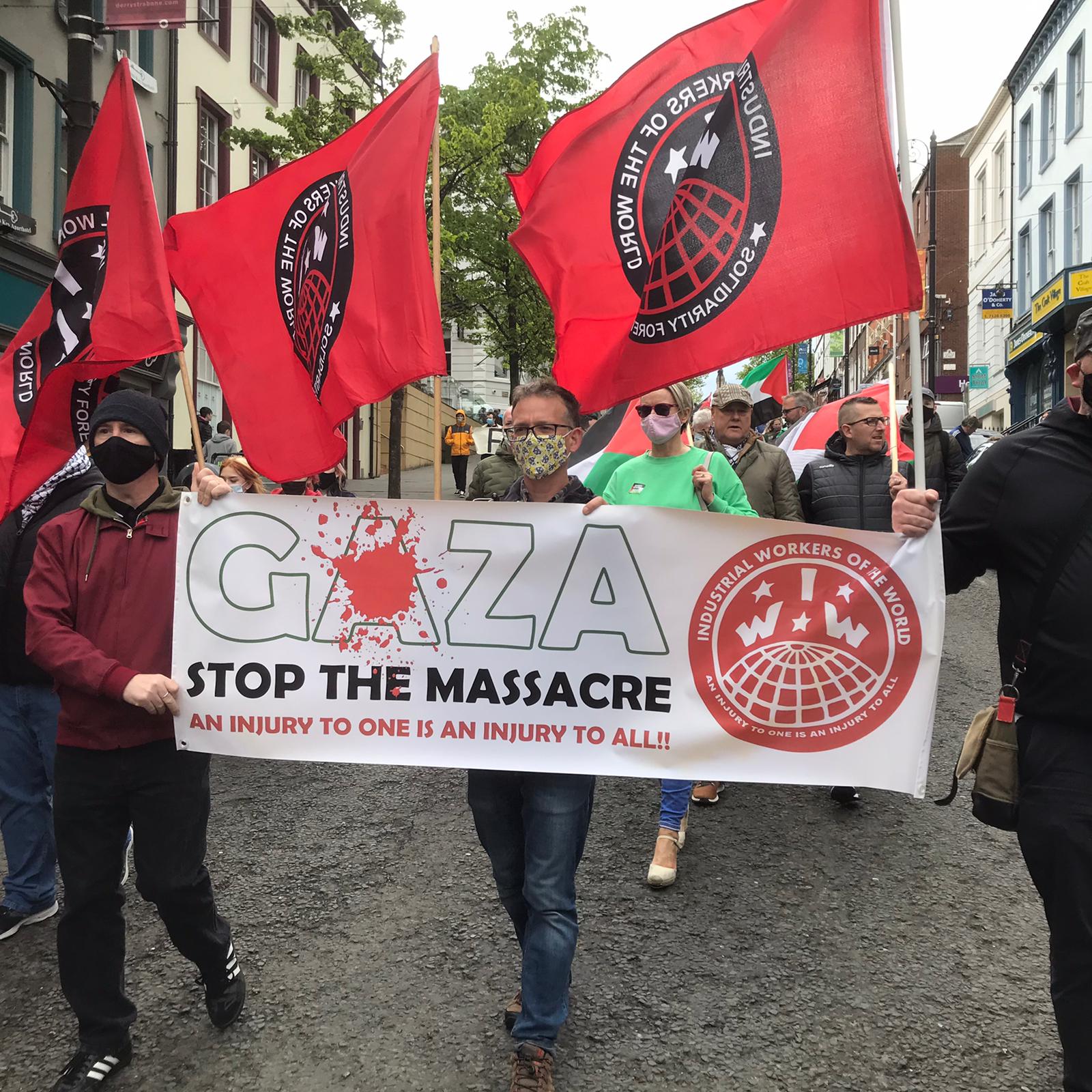 MAY 15, 2021: For IMEMC News, Niall Ó Brolcháin:  A huge crowd gathered as The Derry Branch of the Ireland Palestine Solidarity Campaign (IPSC) held a protest and banner drop at 3pm in Guildhall Square, Derry, Ireland. The protest was socially distanced, and people wore face coverings.

Following a proposal to Council on Thursday, May 13 by People Before Profit (PBP) Councillor Shaun Harkin, Derry, and Strabane District Council (DSDC) agreed to back his proposal for “the right to protest at Saturday’s socially-distanced emergency action in solidarity with Palestine to be respected.”

In a statement, Catherine Hutton, Chairperson of Derry IPSC said:  “So far, 140 Palestinians have been murdered in Gaza including 39 children and 22 women while more than 1000 have been injured. The number of dead and injured is rising at an alarming rate as Israeli forces continue to relentlessly bomb the besieged Gaza strip. “In Sheikh Jarrah, East Jerusalem, the residents have been under siege trying to protect their homes from being stolen by illegal Jewish settlers, protected by Israeli police. This is part of an ongoing campaign of ethnically cleansing Palestinians from East Jerusalem.

“The violations and desecration by Israeli forces and illegal settlers of Al Aqsa Mosque have intensified during the holy month of Ramadan, culminating in an all-out assault on Friday May 7, when hundreds of Palestinian worshippers were attacked and injured with stun grenades, tear gas and steel tipped rubber bullets with several people losing their eyes.  These attacks were repeated on May 10 causing damage to the mosque and hundreds of more injuries. “This caused a wave of anger among Palestinians across Palestinian towns and cities within 1948 Palestine – Haifa, Jaffa, Al-Lydd, Ramle. The West Bank has joined these protests with their brothers and sisters across their homeland. Thousands of Jordanians have marched to the border with Palestine in solidarity and to express their outrage.  Be it in Gaza or all through Palestine there is now a unified struggle against the Israeli occupation.”

Catherine went on to say:  “The Nakba continues – the discrimination, racism and apartheid affects every Palestinian in historic Palestine, the West Bank and Gaza. The denial of right of return, freedom of movement and human rights abuses have not dimmed the deep-rooted sense of identity and connection the people have with their homeland, Palestine. We must stand with them in their struggle. We must put pressure on our governments to impose economic sanctions and an arms embargo on the Israeli state. All of us can play our part – join IPSC, boycott Israeli goods, call on companies like AXA, HP, G4S and our universities to divest from Israel. We must mobilize and act.” Meanwhile similar protests of solidarity have been taking place worldwide. Vast crowds have been gathering in solidarity with Palestine in Berlin, Toulouse, Bagdad, Madrid, Cagliari, Capetown, New York, Karachi and Vienna amongst other major and not so major towns and cities.  Meanwhile in Copenhagen, police attacked a 4000 strong crowd calling for justice, return and liberation for Palestine. Other protests took place in Aberdeen, Scotland, London, Vancouver, Toronto and Athens.  There were widespread protests all over the United States.  As one speaker said at the Derry protest in Ireland, it is now time for a worldwide intifada against this Israeli Apartheid murdering regime.