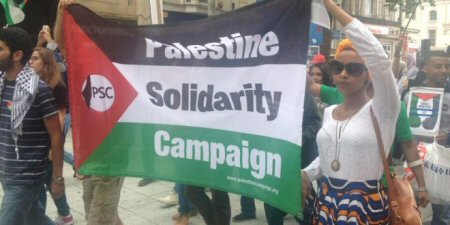 The Palestine Solidarity Campaign (PSC) has welcomed an acknowledgement, from World-Check, that PSC should never have been placed on the database at all and, specifically, should not have been associated with “terrorism”. There were no grounds to suggest that they were either associated with terrorism related activity or that the organisation presented any kind of financial risk.

In December 2015, World-Check created a profile for PSC in their ‘terrorism’ category, identifying Mr. Hugh Lanning as the Chair of the organisation. In March 2017, following correspondence between PSC, Hugh Lanning and World-Check through their respective legal teams, World-Check conceded that PSC and Mr. Lanning ought not to have ever been included in the database.

The PSC, Hugh Lanning and World-Check have reached an agreement to address the harm done to PSC and Mr. Lanning’s reputation, and to resolve the matters between them arising from that profile. The PSC and Mr. Lanning are satisfied with that resolution.

Lanning said: “I am pleased that World-Check agreed it was wrong to include my name in the database, as there are no grounds for me being associated with terrorism.

“I hope the Israeli government and their supporters follow this good example and stop repeating unfounded smears about the PSC and its members. We expect the media to take note of the vindication and rethink printing smears made without qualification, as was done following my deportation from Israel.

“In particular, we hope social media channels will be more responsive to our complaints about inaccurate postings made about us on their mediums.”

Ben Jamal, Director of the Palestine Solidarity Campaign said: “Like many others, our organisation was included on this database for no reason at all. We take such allegations seriously and will not stand for false allegations made about us and our work. Campaigns for Palestinian human rights should not be treated differently from other human rights focused campaigns.”

Ravi Naik, the PSC solicitor from ITN Solicitors, said: “Following correspondence between our firm and lawyers for World-Check, it has been accepted by World-Check that our clients should never have been on the database at all, let alone for an unfounded allegation as egregious as terrorism.

“Our clients maintain that they do not present any financial risk and the agreement reached between them and World-Check regarding the profile has vindicated this position.”