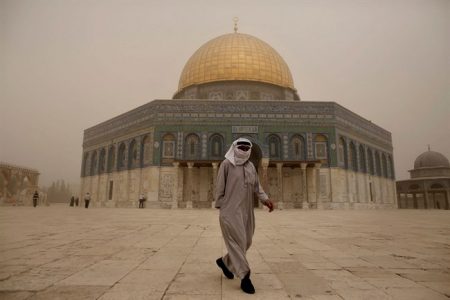 Israeli forces took into custody an employee of the Department of Awqaf in al-Aqsa Mosque while dozens of settlers stormed the courtyard of the mosque, on Tuesday morning.

Local sources stated, according to Al Ray, that the occupation arrested the employee of the Reconstruction Committee of the Awqaf Department, Mahmoud al-Anati from his place of work inside Al-Aqsa Mosque, and took him to a detention center in Jerusalem.

The incident took place at the Maghraba Gate while dozens of settlers stormed the mosque escorted by Israeli forces.

A large presence of worshipers and students of science who were on the grounds resisted the settlers’ intrusion with chanting, thereby preventing them from roaming freely in the courtyards.