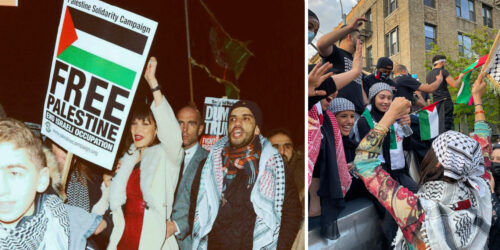 The famous Palestinian-American model Bella Hadid has accused the US social media company Instagram (owned by Facebook) of censoring her posts about the Israeli military occupation of Palestine.

In a statement, Hadid wrote, “When I post about Palestine I get immediately shadow banned and almost 1 million less of you see my stories and posts.”

According to Bazaar fashion magazine, Bella and her sister Gigi Hadid, who is also a model, regularly share information about the Israeli military occupation of Palestine. This past month, the two sisters received praise when they announced that they would be donating their earnings from fashion shows to Ukrainians in need, but were criticized when they added that they would also be donating to Palestinians in need.

In the Instagram world, the term “shadow ban” means a restriction in which only the account owner and their direct followers can see their posts. While Instagram CEO Adam Mosseri has tried to blame ‘the algorithm’ for the hiding of posts in this way, according to a 2020 article in the Huffington Post, Instagram clearly engages in this kind of censorship – and it disproportionately targets women and communities of color, saying, “Instagram acknowledges, however, that it hides public posts it deems to be “inappropriate” — but that don’t actually violate any guidelines — from its Explore and hashtag pages. It does this without alerting affected users, who are often left to wonder why their content’s engagement is lower than usual.

“The objective here, Instagram says, is to prevent the promotion of potentially unsafe posts. But the company has yet to explain how it defines “inappropriate,” or to give users even a vague idea, instead threatening to secretly curtail their visibility should they fail to follow an undefined rule.

“In other words, selective shadow banning is written into Instagram’s rulebook.”

Last May, Bella Hadid was accused by the official Twitter account of the state of Israel of advocating for “throwing Jews into the sea”. The post by @Israel stated, “When celebrities like @BellaHadid advocate for throwing Jews into the sea, they are advocating for the elimination of the Jewish State.” This misrepresentation of what Hadid actually had written led to critiques across social media of the Israeli official government channel for their gross misrepresentation of Hadid’s tweets.

In fact, what she had written was the slogan, “For the river to the sea, Palestine will be free”, which is a common chant during protests – and those who use the chant have repeatedly clarified that it means all Palestinians should have freedom and equality: those living in the West Bank (west of the Jordan River referenced in the chant), those living inside what is now Israel, who make up 20% of Israel’s population but face legal, cultural and language discrimination by the Israeli government and institutions, and those Palestinians living in the Gaza Strip, which borders the Mediterranean Sea (the ‘Sea’ referenced in the chant) but are living in the world’s largest open-air prison, in which Israel controls land, air and sea and will not allow Palestinians to enter or exit.

Following the false accusations of ‘anti-Semitism’ in May 2021, Hadid wrote, “A refugee crisis is a refugee crisis. This is not anti-anything except anti-human suffering and anti-war. If you believe any person or child, anywhere, born or growing up in the many places where there is a refugee crisis, doesn’t deserve this assistance, you are focused on the wrong part. These children don’t choose a side in politics – they are born and raised in this and deserve, at the bare minimum, a decent life.”

The father of Bella and Gigi, Mohammad Hadid, was born in Palestine but fled to Europe during the Nakba (Arabic for ‘Catastrophe’) of 1948, when the state of Israel declared its formation on Palestinian land, and hundreds of thousand of Palestinians were forced to flee under the threat of violence and massacres.