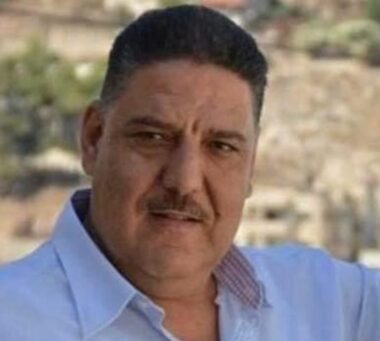 The Health Ministry said the dentist, identified as Nidal Mohammad Akram Jabbarin, 54, suffered a heart attack after the soldiers fired the concussion grenades at the Palestinians while waiting to be allowed through the military roadblock.

An Eyewitness said that Dr. Jabarin was walking in the dedicated area for pedestrians near the military roadblock when a soldier directly fired a concussion grenade at him before he suffered a shock and fell onto the ground.

The head of the Emergency Services at the Palestinian Red Crescent, Dr. Mahmoud Sa’adi, said the medics rushed to the military roadblock to provide him with the needed medical aid, but he was already dead.

Dr. Wisam Abu Baker, the head of Khalil Suleiman Governmental Hospital in Jenin, said Dr. Jabbarin was taken to the Intensive Care Unit, where he was officially pronounced dead despite all efforts to save his life.

The deceased dentist is a married father of four and runs a dental clinic in Jenin, where he also did a lot of charity work to help the poor who need treatment.

Jabarin is from the Marah Sa’ad neighborhood, in Jenin city, in the northern part of the occupied West Bank.

His funeral procession was held in Jenin a few hours after his death and was attended by hundreds of Palestinians, who marched while chanting against the ongoing and escalating Israeli violations against the Palestinian people.

Social, political national, and religious figures in Jenin denounced the latest Israeli crime and called for forming an international committee to investigate Israel’s escalating violations and to hold it accountable.