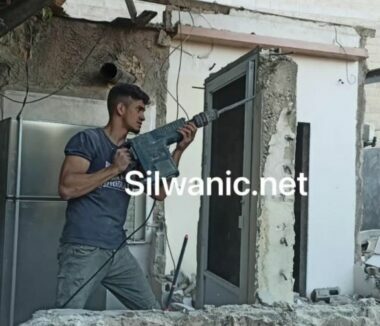 A Palestinian man was forced, Sunday, to demolish his home in Wadi al-Jouz neighborhood, in occupied East Jerusalem, after all attempts to license the property were denied by Israeli courts, despite paying high fines.

The Palestinian, identified as Mohammad Sandouqa, was forced to demolish his property using simple electric tools to avoid the excessively high fines that would be added if the City Council uses it workers and equipment to destroy the property.

Sandouqa filed various appeals with Israeli courts to no avail, including appeals to delay the demolition of the property which was built seventeen years ago.

He was also ordered to pay a 100.000 Israeli Shekels fine that he is still paying its installments, which in turn delayed the demolition until now.

It is worth mentioning that nine family members live in the property, built on land the family owns.

“I will look for a new place for me and my family,” he said, “This will not be easy due to high rental costs, especially in this area which Israel decided to designate as a reserve, and therefore, rejects Palestinian construction permits and even zoning requests.”