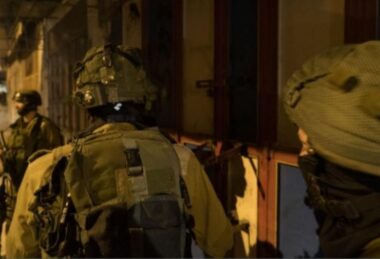 The Palestinian Prisoners’ Society (PPS) has reported that Israeli soldiers abducted, early on Monday, twelve Palestinians from their homes, in several parts of the occupied West Bank, after the army broke into many homes and searched them.

The PPS office in Jenin, in northern West Bank, said the soldiers abducted a former political prisoner, identified as Saed Thabet Abu Obeid, in addition to Mohammad Samir Abu Obeid, after invading their homes in the al-Marah neighborhood in the city.

In occupied Jerusalem, the soldiers abducted Tha’er Anis Ghabbash, who works for the Wall and Colonization Resistance Commission, in addition to Mohammad Raslan Far’un, from their homes in al-‘Ezariyya town, in addition to Ashraf al-Basheeti from Samiramis neighborhood, north of Jerusalem.