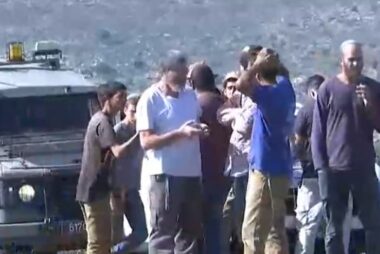 Israeli soldiers attacked, Monday, a nonviolent procession against the establishment of an illegal colonialist outpost west of the central West Bank city of Salfit, and abducted two Palestinians.

Eyewitnesses said the Palestinians marched to the al-Ras area, northwest of Salfit, where the Israeli colonists are attempting to install an illegal outpost on Palestinian lands.

They added that the soldiers, and several colonists, attacked the Palestinian protesters with clubs and batons, especially when they tried to stop Israeli bulldozers from uprooting the lands.

The soldiers chased several Palestinians, and abducted two, before moving them to an unknown destination.

It is worth mentioning that, on Sunday, many colonists invaded approximately 50 Dunams of Palestinian in the ar-Ras area, and uprooted dozens of olive trees.