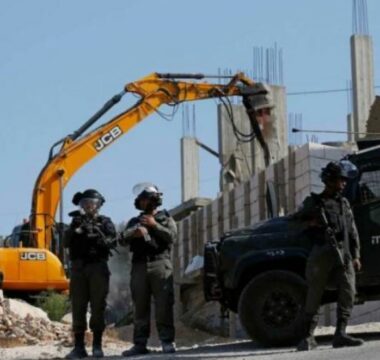 Israeli soldiers demolished, Monday, a Palestinian home in the al-Khader town, south of Bethlehem, south of occupied Jerusalem in the West Bank.

Local activist Ahmad Salah said several army jeeps, and bulldozers, invaded the Um Rokba area, in the southern part of the town, and closed it, preventing the Palestinians from entering or leaving.

Salah added that the soldiers then proceeded to demolish a 200 square/meter home, owned by Mohammad Ya’coub Da’dou’, allegedly for being built without a permit from the Civil Administration Office, the administrative branch of Israel’s illegal occupation.

It is worth mentioning that the area is subject to frequent Israeli violations, including the demolition of many homes and structures, in addition to outstanding orders targeting many more.

Israeli colonists also repeatedly attack and uproot Palestinian lands in the same area, which is essential for Palestinian constructions due to population growth.

The Palestinians have already lost large swaths of lands for the construction and expansion of Israel’s illegal colonies, built in direct violation of International Law, and the Fourth Geneva Convention.

In related news, the soldiers destroyed three Palestinian water wells in the villages of Arrana and al-Jalama, northeast of Jenin, in northern West Bank.