Palestinian Forced To Demolish His Own Home In Jerusalem. 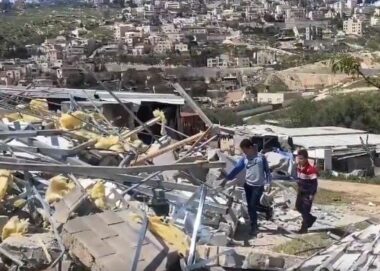 A Palestinian man was forced to demolish his own home, Sunday, in Jabal al-Mokabber, in occupied Jerusalem, under the pretext of not obtaining a permit.

Local sources said the Palestinian, Amer Shqeirat, had to demolish his home to avoid paying more excessively high fines and fees, in addition to the exaggerated demolition costs if the City Council uses its workers and machines.

Shqeirat lived in the home along with his wife and four children, all of whom were rendered homeless despite all appeals and fines he already paid.

Israel’s policy of home demolitions is an illegal act of collective punishment against entire families.

According to data by the Israeli Committee Against House Demolitions (ICAHD), more than 120,000 Palestinian homes have been demolished in Israel and the Occupied Palestine Territory (OPT) since 1948.

In 2020, ICAHD analysis revealed that 865 structures were demolished, and 1,014 people displaced in the OPT with a further 5,615 people directly affected. The Negev Coexistence Forum reports 2,586 buildings demolished in the Negev.

As an Israeli peace and human rights organization, ICAHD focuses its activities around resistance to Israel’s policy of demolishing Palestinian homes, both in Israel and in the Occupied Palestine Territory (OPT). The demolition policy is part of Israel’s attempt to Judaize Palestine, to transform an Arab country into a Jewish one.

During and after the Nakba of 1948, when the state of Israel was established, it systematically demolished about 52,000 Palestinian homes, more than 530 entire villages, towns, and urban neighborhoods. Since the beginning of the Occupation in 1967, Israel has demolished another 55,000 homes in the West Bank, East Jerusalem, and Gaza. Thousands more continue to be demolished inside Israel itself. Full Report