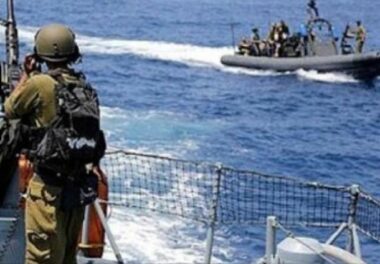 Israeli navy ships fired, Monday, many rounds of live ammunition at Palestinian fishing boats near the shore of Gaza Sea, in the besieged coastal region. The attack came just one day following a similar violation targeting fishermen and farmers.

Eyewitnesses said the navy fired live rounds at the boats while fishing less than three nautical miles from the shore, forcing them to leave in fear of further violations.

They added that the navy also chased some Palestinian boats and used water cannons against them, especially as they were trying to head back to the shore.

On Sunday, Israeli soldiers fired live rounds at fishermen in the Sudaniyya Sea, north of Gaza city, and farmers on their lands near the perimeter fence, east of Khan Younis, in the southern part of the Gaza Strip.

Israeli navy ships also fired dozens of sporadic fire, in addition to using water cannons, targeting fishing boats near Khan Younis, causing damage to at least one boat, and forcing the fishermen back to the shore without being able to fish and provide for their families.

In related news, the soldiers fired many live rounds into farmlands, east of the al-Qarara area, east of Khan Younis, forcing the farmers to leave.