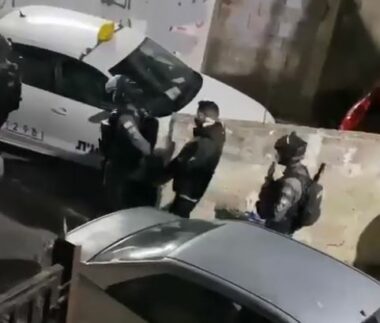 The soldiers also invaded Sa’ir town, northeast of the southern West Bank city of Hebron, searched many homes and abducted Sa’ad Nimir al-Froukh, before moving him to an unknown destination.

The army also invaded many neighborhoods in Hebron city, and installed roadblocks at the main roads leading to Sa’ir and Halhoul towns, northeast and north of Hebron, before stopping and searching dozens of cars and interrogated many Palestinians while inspecting their ID cards.

In occupied Jerusalem, the soldiers invaded and violently searched many homes in al-‘Isawiya town, and Qalandia refugee camp, before abducting seven Palestinians, including a father and his teenage son.

The soldiers also invaded the al-‘Ezariya town, east of Jerusalem, before invading and ransacking two homes.

The Wadi Hilweh Information Center in Silwan (Silwanic) has reported that the soldiers also abducted a young man, who remained unidentified at the time of this report, in Shu’fat refugee camp, in Jerusalem.

The army also installed a roadblock in Salahuddin Street, in Jerusalem, and preventing the Palestinians from crossing, in addition to interrogating many of them while searching them and investigating their ID cards.

On Sunday evening, the soldiers abducted Mohammad Ma’moun Amarna, 19, from Ya’bad town, southwest of Jenin, while crossing the nearby Mabo Dothan military roadblock, which was installed on private Palestinian lands.

In addition, the soldiers abducted a former political prisoner, identified as Mahmoud Taiseer Tahaina, 38, from Sielet al-Harithiya town, west of Jenin, after stopping him at a military roadblock near Tulkarem, in northern West Bank.

It is worth mentioning that Tahaina is a former political prisoner who spent six years in Israeli prisons and detention centers.