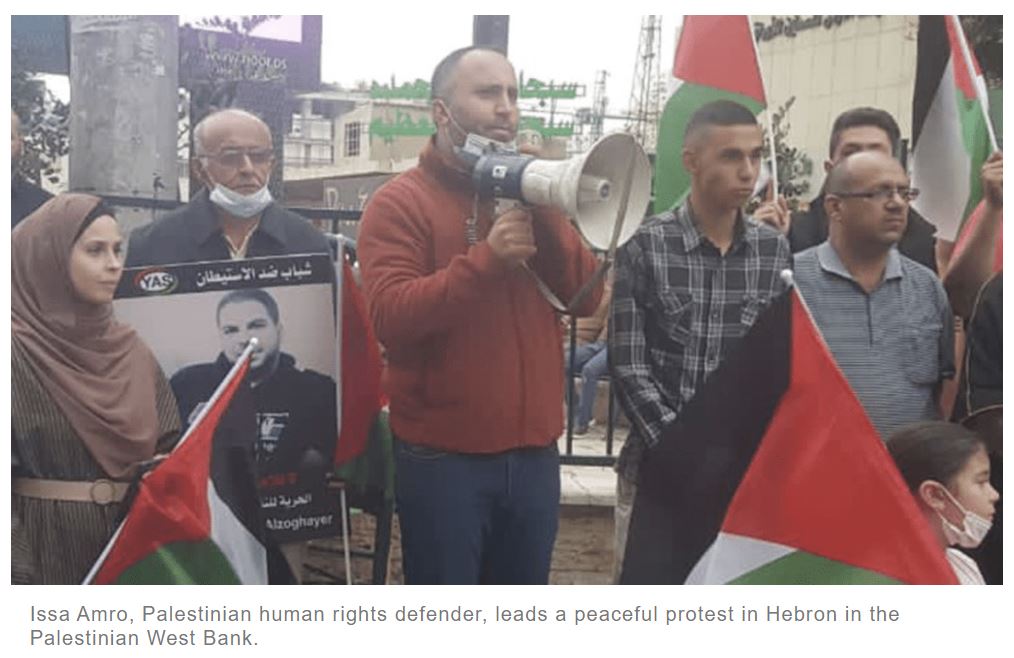 The Israeli military court announced today its guilty verdict against Palestinian Issa Amro, in what human rights advocates have called a “campaign of persecution” against a nonviolent community organizer.

On Wednesday morning, an Israeli military court handed Palestinian human rights activist Issa Amro a guilty verdict on 6 of 16 counts. Charges are related to his nonviolent protests and organizing against the Israeli occupation.

Middle East Eye reports that Amro, who was recognized by the United Nations as “Human Rights Defender of the Year” in 2010, was convicted on 3 counts of “participating in a rally without a permit,” 2 counts of “obstructing a soldier,” and 1 count of “assault.”

Amnesty International has characterized the charges as “baseless,” and part of a “campaign of persecution” against Amro.

The obstruction charge relates to a sit-in protest in 2012; the assault charge refers to a case that had already been closed, in which he allegedly shoved a soldier in 2010.

As If Americans Knew reported earlier, Amro’s trial has been ongoing since August 2016. (A link to contact Congress members on his behalf is here.)

After the ruling was announced, Issa Amro declared, “Today Israel announced that Palestinians are not allowed to peacefully protest the Israeli occupation without a permit from the occupier,” adding, “this conviction is the military system against the Palestinian nonviolent resistance.”

Amro’s lawyer stated that the verdict is “an example of how the courts are used in order to deter the important voices of human rights defenders”; she denounced the military court as “just an organ of occupation.”

One Israeli expert believes the court chose to convict Amro on just 6 charges instead of all 16 because of his celebrity, and expects a 6-month sentence for each violation – although they may be served concurrently.

Amro’s sentencing is scheduled for February 8th; it is expected that his legal team will file an appeal after that.

The guilty verdict was expected by those who follow the Israeli military court system, as it famously has a conviction rate over 99% for Palestinian prisoners – due at least in part to threats and torture used regularly to coerce confessions, including from children.

Amnesty International has been putting pressure on Israel to drop the charges against Amro, and

to end their systematic attacks against Palestinian activists who speak up and peacefully act against Israel’s long-standing military occupation. Such attacks are an assault on the right to freedom of expression. The international community must act now to stop this campaign of repression and work to ensure that human rights defenders and activists in Israel and the OPT are protected from arbitrary interference in their work.

In 2017, Bernie Sanders and 35 other members of Congress appealed to then-Secretary of State Rex Tillerson on Issa Amro’s behalf, asking him to urge Israeli leaders to reconsider the charges.

Israeli prisons currently hold about 4,400 Palestinian political prisoners, 1 in 10 of which are administrative detainees being held without charge, and 160 of which are children.

Multiple human rights organizations have reported that Israel’s military court system is “in violation of international standards”; it detains and prosecutes about 700 Palestinian children alone each year.

Protests have been going on for years, stemming from Israel’s draconian occupation of Palestinian land since 1967, and the justice crisis initiated by the creation of the state in 1948, in which 750,000 Palestinians were displaced and became refugees.

Kathryn Shihadah is staff writer for If Americans Knew. She also blogs at Palestine Home.