Palestinian Government Calls For Lifting The Israeli Siege On Hebron 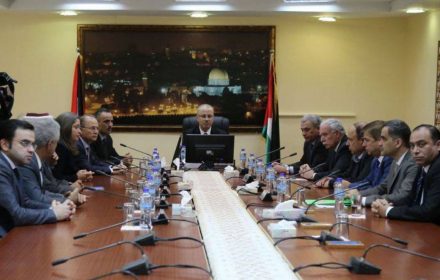 The Palestinian government called on the international community and various human rights groups to intervene, and pressure Israel into lifting its siege on the southern West Bank district of Hebron, the ongoing home invasions and abductions.

Spokesperson of the Palestinian government Yousef al-Mahmoud said that what Israel is doing, its siege, ongoing home invasions ,and kidnappings, are illegal acts of collective punishment targeting hundreds of thousands of Palestinians.

Al-Mahmoud added that the Israeli attacks were part of ongoing policies practiced by the occupation authorities in direct violation of International Law, and the Fourth Geneva Convention.

“The Israeli justifications of its violations are just excuses made by Israel to continue its military aggression against the Palestinian people, living under occupation and oppression,” al-Mahmoud said, “But this occupation is the root of constant tension, and instability, in the entire region.”

Late at night and on Sunday at dawn, the soldiers invaded Sa’ir town, north of the southern West Bank city of Hebron, injured at least four Palestinians and kidnapped three others.

The soldiers also invaded ‘Aida refugee camp and Artas town, in the West Bank district of Bethlehem, kidnapped two Palestinians, and summoned another for interrogation.