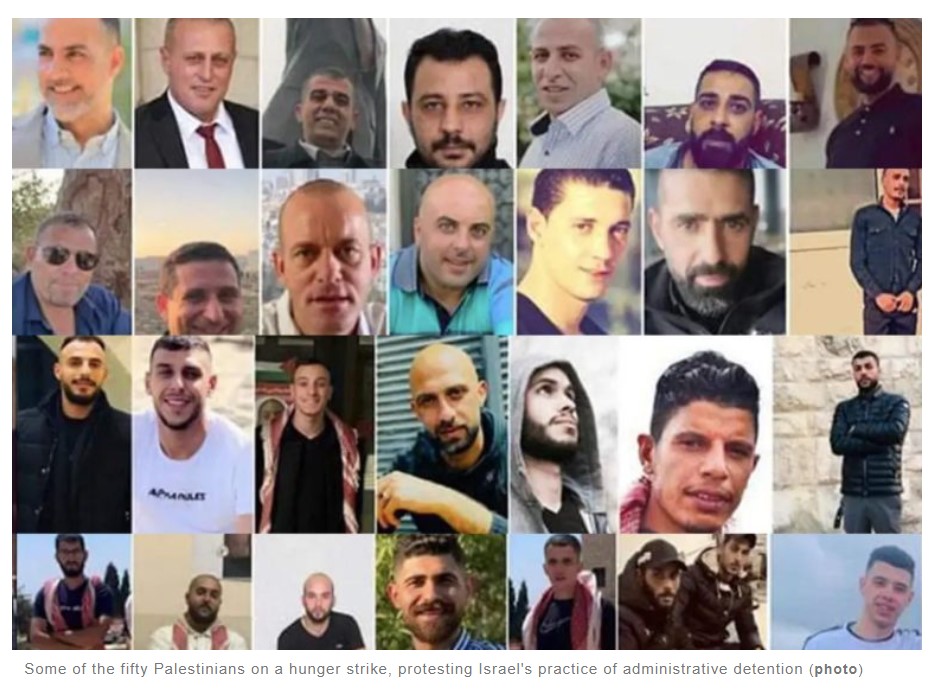 By Kathryn Shihadah: Over 1 million Palestinians have been held in Israeli prisons over the years. Thousands have been held in “administrative detention,” which means imprisonment without a trial or even charges. More and more, Palestinian prisoners are protesting this barely legal practice through hunger strikes. Frail, emaciated Palestinians make Israel very nervous.

Another wave of hunger-striking Palestinian prisoners is hitting Israel – a phenomenon that is rarely reported when it involves Palestinians but has deep roots in the culture of resistance worldwide.

On September 25, thirty Palestinian prisoners began an open-ended hunger strike, in protest of their administrative detention – Israel’s policy of holding Palestinians indefinitely without charge or trial.

Another 900 stood in solidarity with the strikers by refusing meals for a day.

The idea of a prisoner embarking on a hunger strike that may end in his own death seems self-destructive, even nonsensical. Why does it persist?

“An ultimate form of non-violence”

Palestinians inside the walls of Israeli prisons have little agency, but face myriad injustices. Nearly 1 in 5 Palestinian prisoners are being kept illegally under administrative detention (more below); most of the rest are not criminals, but political prisoners, found guilty in Israel’s kangaroo military court system (where 99.74% of the cases end in conviction).

are keenly aware that they are choosing an option of last resort, which exhibits a willingness to sacrifice their body and even life itself for goals deemed more important…

A hunger strike is an ultimate form of non-violence…physically harmful only to the self, yet possessing in certain circumstances unlimited symbolic potential to change behavior and give rise to massive displays of discontent by a population believed to be successfully suppressed.

The decision to embark on a hunger strike is a decision to take control of one aspect of life in a place where Israel controls nearly everything. The Palestinian striker brings attention – often worldwide – to the injustice of administrative detention specifically and the occupation as a whole.

Israel’s response to the strikers is telling. During a mass hunger strike in 2014, Al Shabaka reports, “Israeli officials maintained that the hunger strikers were ‘terrorists,’” and that “hunger strikes were a ‘new type of suicide attacks.’” Although strikers are physically weak, prison authorities do not hesitate to use torture, as well as handcuffing prisoners to their hospital beds and other demeaning actions.

Starvation in the name of justice is clearly a punishable offense.

Palestinians who conduct hunger strikes are never alone in their effort. Even if no other prisoner joins in the action, Palestinian and international communities and organizations support the struggle. They mobilize to host local demonstrations, highlighting Israel’s illegal, wholesale use of administrative detention, and pressuring the Israeli government to yield to or negotiate with the striker.

Activism like this places the Palestinian cause squarely in the middle of the worldwide fight for justice and basic human rights. As Al Shabaka puts it, Palestinian hunger strikers are “doing what they do best – legitimate resistance – under the harshest circumstances and by every means available to them.”

Hunger strikes in the last decade

By 2014, the practice was back in full swing, and over 100 Palestinian detainees again protested. After 63 days, the strike was called off, apparently due to urgent issues in the West Bank (where Israel was conducting mass arrests) and Gaza (where Israel initiated an assault that led to 2,200 Palestinian deaths).

2017 saw another mass hunger strike, this one with over 1,000 Palestinian participants. Israeli officials may or may not have given in to their demands.

As we have done many times before, we once again call on Israel either to charge and try, or release, all of the administrative detainees…Israel’s practices exceed all of the international legal boundaries.

Amazingly, Khalil Awawdeh persisted 180 days, losing over half his body weight, before Israel agreed to his release. Though he was on his deathbed at the time, he declared, “This resounding victory extends the series of great victories achieved by the mighty and honorable people of this nation.”

Another prisoner, Hisham Abu Hawwash, refused food for 141 days before Israel finally gave in to his demand that he be either tried or released. At the age of 39, he had already spent 8 years in Israeli prisons.

Just 7 months after his release, Abu Hawwash was detained again on September 20, 2022.

Many Americans are unaware of Israel’s much-used practice known as administrative detention.

According to Addameer, a Palestinian prisoners’ rights organization, administrative detention is

a procedure that allows Israeli occupation forces to hold prisoners indefinitely on secret information without charging them or allowing them to stand trial.

The secret information or evidence cannot be accessed by the detainee nor his lawyer, and can according to Israeli military orders, an administrative detention order can be renewed for an unlimited time.

The court issues an administrative detention order for a maximum period of six months, subject to renewal.

Under international law, administrative detention is to be a last-resort action, as it robs individuals of basic human rights – but Israel uses it profusely: at this moment, about 800 Palestinian prisoners are being held under administrative detention orders (out of over 4,600 total Palestinian prisoners in Israeli jails). Some have spent years in prison without charge or trial.

The inherent violence and injustice of this practice by the Israeli government has induced many Palestinians to embark on hunger strikes.

The historical context of administrative detention

The story of hunger strikers and administrative detention is incomplete without some understanding of the background.

Palestinians have suffered injustice since before Israel’s birth as a settler colonial project (an enterprise that calls for the elimination of indigenous people, replacing them with a settler society). In 1948, Israel subjected 750,000 Palestinians to exile and took over 78% of the land of historic Palestine.

Since then, Israeli violence has taken many forms, including airstrikes, targeted assassinations, home demolition, humiliation, restrictions on movement and trade, and imprisonment and administrative detention.

It is worth recalling that since the Israeli occupation began in 1967, Israel has arrested more than 800,000 Palestinians, nearly 20% of the overall population, and 40% of the male population.

This fact alone makes clear the extent to which arrests and imprisonment are a mechanism Israel uses to control the population while it dispossesses them, settling Israeli Jews in their place.

The US plays a part in Israel’s bullying of peaceful protesters: thanks to the Israel lobby, we provide not just $10 million a day in military aid to Israel, but outsized support in Congress and the United Nations.

Starting as early as 1968, Palestinian administrative detainees and political prisoners have participated in hunger strikes to call attention to Israel’s violation of international law and inhumane treatment. Since then, according to Al Shabaka,

Their efforts won them a few improvements in their prison conditions, including being allowed to have family photos, stationery, books, and newspapers. Another win was an end to the requirement that Palestinian prisoners address their jailers as “sir.”

The British practiced administrative detention in the years before Israel was born, and remains more or less in place today as the “Israeli Law on Authority in States of Emergency.” It enables Israel to imprison Palestinians by the thousands, more or less indefinitely, based on “secret evidence” that neither the prisoners nor their attorneys can see or rebut.

The “emergency” is Palestinian resistance against their oppressors – and the pro-Israel lobby in the US, combined with complicit Congress people, has put the U.S. firmly on the side of the oppressor. This will continue until more Americans demand change.