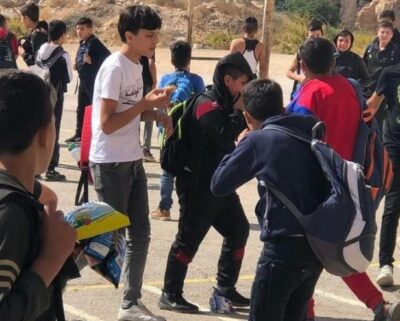 On Thursday afternoon, Israeli soldiers injured seventeen schoolchildren in the southern part of the occupied West Bank in Hebron.

Media sources said the soldiers surrounded the school and fired many gas bombs at it and surrounding areas.

They added that seventeen children suffocated due to the severe effects of tear gas inhalation before receiving the needed treatment.

The soldiers also abducted two children while walking near the school and took them to an interrogation facility.

A day earlier, the soldiers stormed the school in the Abu Sneina neighborhood and forced the children to leave before forcing the education facility to close.

Furthermore, soldiers injured dozens of Palestinians in several parts of the Hebron governorate.

On Wednesday, Israeli soldiers killed Osama Mahmoud Adawi, 18, and injured several others during protests that occurred at the entrance of the Al-Arroub refugee camp north of Hebron.