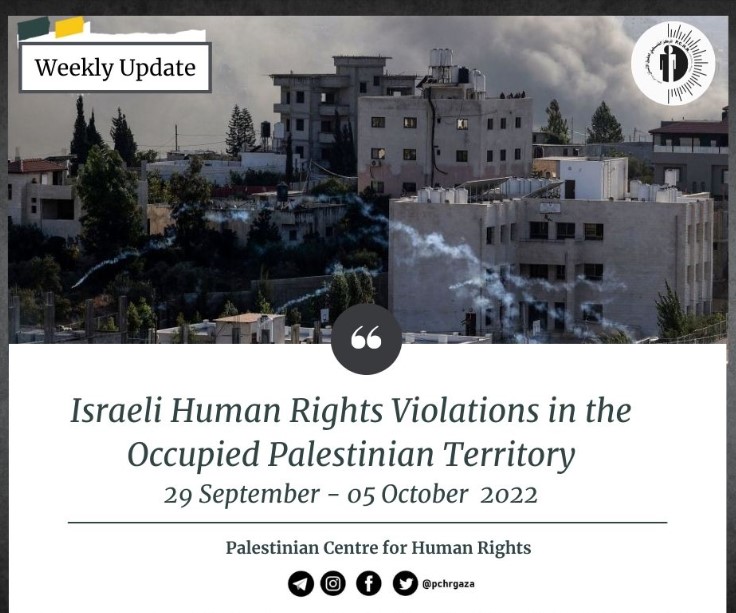 On 07 and 08 October 2022, IOF killed 4 Palestinians, including 2 children, and wounded 10 others, including 3 in critical condition; one of them was a child, in 3 separate incidents in the West Bank. Details available in PCHR’s press release.

On 10 October 2022, Mahmoud Mohammad Samoudi (12) succumbed to a live bullet wound in the stomach during IOF’s incursions into Jenin refugee camp on 28 September 2022 when 4 Palestinians were killed, including a civilian, and 28 others were wounded. Details available in PCHR’s press release.

On 12 October 2022, Osama ‘Adawi (17) was killed by IOF fire in Al ‘Aroub refugee camp in Hebron as part of crimes of excessive use of force.

Meanwhile, those injured were victims of excessive use of force that accompanied IOF incursions into cities and villages, or suppression of peaceful protests organized by Palestinian civilians, and they were as follows:

On 07 October 2022, 13 Palestinians were injured with metal bullets during clashes with IOF after the latter’s suppression of Kafr Qaddoum weekly protest in northern Qalqilya.

On 08 October 2022, IOF assaulted a group of Palestinians and arrested one of them while harvesting olives in Silwan village in East Jerusalem.

On the same day, a 36-year-old Palestinian was wounded with a live bullet in the left knee after IOF opened fire at a group of workers near the annexation wall, north of Tulkarm, as the latter were trying to enter Israel for work. Also, a child sustained a rubber bullet wound, while others sustained bruises and suffocated.

Moreover, 15 Palestinians were arrested after being beaten during IOF’s suppression of those celebrating Prophet Mohammed’s Birthday, also known as Mawlid An-Nabawi, in Bab Al ‘Amoud yard in East Jerusalem.

Moreover, a Palestinian was wounded with a rubber bullet, and 3 others, including a woman, were arrested in clashes with IOF, who moved into Shu’fat refugee camp in East Jerusalem after a shooting attack was carried out at IOF stationed at the camp checkpoint.

On 09 October 2022, 2 Palestinians, including a child, were wounded with rubber bullets during confrontations with IOF, who moved into Sarda village, north of Ramallah.

On 10 October 2022, 2 Palestinians were wounded during IOF’s suppression of protesters against the punitive measures imposed on Shu’fat refugee camp and al-Salam Suburb in East Jerusalem.

On 12 October 2022, IOF assaulted 3 Palestinians, including 2 guards of Al-Aqsa Mosque, right before arresting them inside the mosque’s yards and coinciding with the settlers’ raids.

On the same day, 2 Palestinians were wounded with live bullets as IOF opened fire at them during clashes that followed settlers’ attacks protected by IOF in Qusra village in Nablus. In addition, a 22-year-old Palestinian was wounded with a rubber-coated bullet in the eye in clashes with IOF near the 300 military checkpoint, north of Bethlehem.

Also, a Palestinian was injured and another was arrested during IOF’s widescale and continuous confrontations in the neighborhoods of Jerusalem as part of the protests organized against the closure imposed on Shu’fat refugee camp and ‘Anata village for 5 days. In the evening, a 14-year-old child was wounded with a live bullet in the foot right before he was arrested during clashes with IOF in western Beit Ummar in Hebron.

”So far in 2022, IOF attacks killed 133 Palestinians, including 93 civilians: 27 children, 8 women, 2 Palestinians killed by Israeli settlers and the rest were activists; 15 of them were assassinated in IOF’s attacks in the Gaza Strip and West Bank in addition to hundreds of injuries, including women and children. Moreover, 4 Palestinian detainees, including a woman, died in the Israeli prisons.

IOF demolished 2 houses, rendering a family of 8 persons, including 2 women and 4 children, homeless, and an agricultural tent. Details are as follows:

On 08 October 2022, IOF forced a Palestinian to self-demolish his house in the Old City of East Jerusalem under the pretext of unlicensed construction, rendering him and his mother homeless [1].

On 10 October 2022, IOF demolished an agricultural tent, south of Yatta in Hebron.

On 06 October 2022, IOF demolished a 110-sqm home in Dura in Hebron, rendering a family of 6, including 4 children, homeless under the pretext of unlicensed construction. During the demolition, IOF assaulted a Palestinian and his son and arrested one of them but released him later.

”Since the beginning of 2022, Israeli occupation forces made 118 families homeless, a total of 699 persons, including 135 women and 317 children. This was the outcome of IOF demolition of 126 houses and many residential tents. IOF also demolished 92 other civilian objects, leveled vacant areas of land and delivered dozens of notices of demolition, cease-construction, and evacuation.

With the beginning of the olive harvest season and as it happens every year, the settlers attacked this week farmers and landowners and stole their crops in addition to cutting down the trees. Details are as follows:

On 10 October 2022, settlers attacked farmers, who were harvesting olives in Khallet Hassan area, west of Salfit.  As a result, some of them sustained injuries.

On 11 October 2022, settlers from “Ma’ale Levona” settlement in eastern Ramallah threw stones at Palestinian homes along the Old Nablus Street in Sinjil village, east of the city, causing damage to the windows of the houses and a car in the area.

On 12 October 2022, settlers from Esh Kodash settlement outpost established on the lands of Qusra town, southeast of Nablus, attacked the eastern outskirts of the village and blocked Qasra-Jalud road with stones.

They set fire to 3 newly built and firmly closed barracks used as small poultry farms. Also, they set fire to a truck while putting poultry in it before Palestinians confronted them with stones amid intense clashes.

”Since the beginning of the year, settlers conducted at least 149 attacks. In two of the attacks, 2 Palestinians were killed.

IOF carried out 203 incursions into the West Bank, including occupied East Jerusalem. Those incursions included raids and searches of civilian houses and facilities and establishment of checkpoints.

During those incursions, 107 Palestinians were arrested, including 9 children and 2 women. In the Gaza Strip, on 12 October 2022, IOF conducted a limited incursion into eastern Al-Bureij refugee camp, east of the Central Gaza Strip

For the fifth day in a row, IOF continue to impose a siege on Shu’fat refugee camp and ‘Anata village in Occupied East Jerusalem, including the closure of entrances and checkpoints and arrest of at least 25 Palestinians, as part of collective punishment measures against tens of thousands of people, allegedly after announcing that the person who conducted Jerusalem attack, where an Israeli female soldier was killed, was from Shu’fat camp. Details available in PCHR’s press release.

The Israeli occupation maintains its illegal and inhuman 15-year closure on the Gaza Strip. Details available in PCHR’s monthly-update in the Gaza crossings.

Israeli authorities announced crossings with the West Bank and Gaza Strip will be closed from Sunday noon, 09 October 2022, to Tuesday midnight, 11 October 2022, for the Jewish Sukkot holiday.

”So far in 2022, IOF established 3527 temporary military checkpoints and arrested 159 Palestinians at those checkpoints

[1 IOF demolish Palestinian houses upon demolition notices in occupied Jerusalem using their vehicles under the pretext of unlicensed construction or as part of collective punishment policy, provided that the Palestinians either pay the demolition high costs or force them to self-demolish their houses.