Palestinian in Jerusalem Forced to Demolish His Own Home 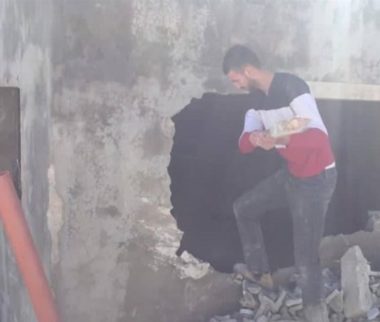 A Palestinian citizen from the northern occupied West Bank city of East Jerusalem, in Jabal al-Mukabir neighborhood, embarked on tearing down his own home, on Saturday. The Israeli municipality of Jerusalem threatened to charge extreme fees for the municipality to demolish it, forcing him to demolish it himself.

The Palestinian News and Info Agency (WAFA) reported that the homeowner, Nasser Abu Ze’eter, was told by the municipality that he must demolish his home under the pretext of not having building permit, a nearly impossible feat with current Israeli prerequisites.

Palestinians in occupied Jerusalem are frequently forced to build without permit because the Israeli municipality rarely issues permits for the city’s Palestinian citizens as a way to reduce their number in the city, by forcing them to leave it and find accommodation elsewhere.

The Rome Statute of the International Criminal Court states that deportation or forcible transfer of a population, when committed as part of a widespread, systematic attack directed against a civilian population, is a crime against humanity.