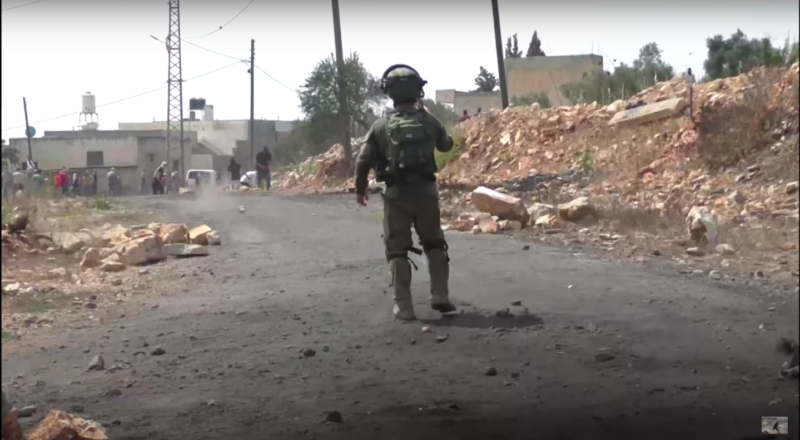 The Israeli military attacked, Friday, unarmed Palestinians during the suppression of the 3 demonstrations held against Israel’s ongoing colonial ventures in the occupied West Bank, the Palestinian Information Center reported.

Palestinian villagers sang patriotic slogans, and voiced their rejection of the many operations aimed at erasing the Palestinian cause. Demonstrators held a mock funeral for the Arab League during this week’s march, expressing their condemnation of Arab countries at the most recent normalization agreements, made with the occupation state of Israel.

Locals from Kufur Qaddoum village, east of Qalqilia city, in the northern West Bank, said that a group of Israeli forces opened fire towards Palestinian youths who were throwing rocks and returning tear-gas canisters to the soldiers.

Four civilians, including a journalist who was covering the protest, were shot by Israeli troops, while dozens more suffered the toxic effects of tear-gas inhalation.

Israel closed the main road toward Nablus in 2002, and since 2003, local Palestinians have participated in weekly marches to show their opposition to the illegal colonies in the West Bank, and continue to demand that the Israeli authorities open the road.

In the southern occupied West Bank city of Hebron, several Palestinians choked from Israeli army fired tear-gas, during confrontations with Israeli soldiers in the Bab Al-Zawiya area in the city center.

The area has become the frontline of the battlefield, adjacent to Israeli military sites and illegal settlements.

In Kifl Hares, northwest of Salfit, in the northern West Bank, Palestinian protesters for the sixteenth week, gathered in rejection of Israel’s ongoing colonial expansion.

Israeli troops suppressed the weekly march, which was held after the Friday prayer, in front of the military gate, entering the town.