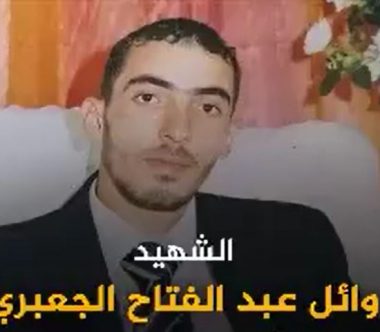 Israeli soldiers killed, Monday, a young Palestinian man near the al-Mowahel military checkpoint, located near the illegal Israeli settlement of Keryat Arba in Hebron, in the southern part of the occupied West Bank.

The soldiers shot the young man with multiple live rounds, then left him lying on the ground and prevented ambulances from reaching him. He eventually bled to death from his wounds.

Although the soldiers claimed that the young man had attempted to carry out a stabbing attack at the checkpoint, they presented no evidence for this claim, and the video released by the Israeli military shows al-Jabari’s body lying on the ground far from the checkpoint in the middle of the street.

The Palestinian has been identified as Wael Abdul-Fattah al-Ja’bari, a 27-year-old Palestinian, from Hebron.

The slain Palestinian is a married father of two children,  and was shot just meters away from his home.

Israeli forces reportedly shot the youth with several bullets throughout his body and prevented the access of ambulance crews to the site of the incident, leaving the youth to bleed to death.

No Israeli soldiers were injured or hurt in any way, as the young man was shot while far from the checkpoint.

Reporters from Palestine TV attempted to cover the incident, but were prevented by Israeli soldiers from accessing the area, and were attacked by the soldiers, who hit them and tried to break their equipment.

According to Human Rights Watch, Palestinians in Hebron are subjected to harassment ‘almost every day’ owing to a resurgence of extremist Zionism within Jewish enclaves.

In 2016, two Israeli soldiers received only 9 months in prison for shooting two Palestinian civilians dead; in 2012 a female Israeli soldier was awarded a Certificate of Merit for shooting an unarmed 17-year-old boy at a checkpoint, according to journalist Ruari Wood of Amity Underground.

Israeli settlers in Hebron frequently chop down olive trees that provide a livelihood to many Palestinians, and rolling armored Caterpillar bulldozers through buildings that have reliably sheltered generations of Palestinian families.