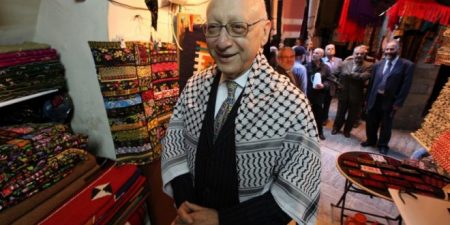 Palestinians are mourning the passing of British Member of Parliament and long time friend of the Palestinian people, Gerald Kaufman.

“On behalf of the Palestinian leadership and the people of Palestine, we mark with deep sorrow the passing of Sir Gerald Bernard Kaufman, the longest-serving British MP from the Labor Party, who passed away on Sunday evening at the age of eighty-six,” Palestine Liberation Organization (PLO) Executive Committee member Dr. Hanan Ashrawi said on Tuesday.

“In addition to being a leading intellectual figure, opinion-maker, writer, and politician dedicated to social justice, Sir Kaufman was also a dear friend of Palestine who courageously advocated for sanctions against Israel for its war crimes and passionately defended our right to self-determination, freedom and statehood,” she said, according to WAFA.

“His passing is a great loss, and our thoughts and prayers go out to his family, loved ones and the people of Britain,” said the PLO official.

Following the war on Gaza, he compared Israel to the Nazis:

(Video stream and photo provided by the  PNN.)