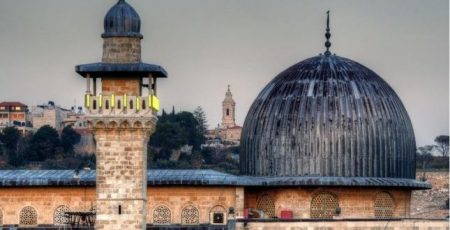 Palestinian presidential spokesman Nabil Abu Rudeina warned of the danger of Israel’s latest procedures of establishing legislation outposts and preventing prayer call through mosque loudspeakers, which is said will drag the region into a disaster.

Abu Rudeina , on Sunday evening, said that these measures are completely unacceptable, adding that Palestinian leadership will go to the UN Security Council, and to all the relevant international institutions, to stop the escalating  measures.

Abu Rudeina’s words came, according to the PNN, after a legislation commission, adopted  Sunday evening, which touts new discriminatory laws against Palestinians. The first law pertains to settlement legislation, and the second law prevents the Azan (call to prayer) from being broadcast over loudspeakers in the Islamic mosques in all the cities, and especially in Jerusalem.

According to Israeli sources, the Ministerial Committee on Legislation approved unanimously a draft regulation bill which seeks to normalize the status of thousands of housing units in settlements built on private Palestinian land.

Seven ministers support the proposal, with no minister objecting or even abstaining, despite the overwhelming opposition of the Attorney General Avi Chai Mendilbdi, who participated in the meeting.

Israeli Minister of Education and far-right Jewish Home Party president, Naftali Bennett, who introduced draft decisions for voting, said, after the vote, that “Israel, today, began a historical process to arrange a settlement in Judea and Samaria.”

He added: ”I congratulate the Prime Minister and Ministers who take required responsibility to lead the right-wing government and achieve national vision,” stressing that the Israeli government will continue to achieve the objectives for which they were elected.

The ministerial committee also approved legislation for the prevention of the Azan, after it was put to a unanimous vote.

Adeis said, in a press release, that the law expresses racisim, exceeding political dimensions and threatening the entire region with religious war, because it  violates freedom of belief and means of expression guaranteed by both heavenly and international laws.

He stressed that the decision exudes extreme racism toward the sons of the Islamic religion in Jerusalem, the city that racists are trying to turn into a city of exclusionary characteristics which reflect the color of a racist and extremist Zionism.

Palestinian Awqaf Minister called on the international community and the Arab and Islamic worlds, as well as international institutions, to protect the Islamic and Christian holy sites and places, demanding immediate action in pushing the Israeli government to retreat from such extremist and irresponsible decisions.