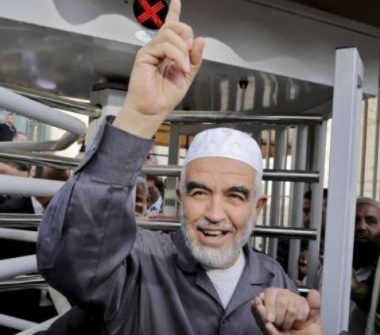 Sheikh Raed Salah, the head of the Islamic Movement, has declared an open-ended hunger strike, protesting bad treatment in Israeli prison, and his continued solitary confinement.

Sheikh Salah, who heads the northern branch of Islamic Movement in historic Palestine, is being held at the Ramon prison, in the Negev Desert.

The Israeli Prison Service said Sheikh Salah “is a threat to Israel’s security,” therefore, it wanted to keep him in solitary confinement, especially because he is an influential figure.

Sheikh Salah was taken prisoner in May of this year, and was later sentenced to nine months, after being “convicted of inciting violence and racism.”

It is worth mentioning that Sheikh Salah was repeatedly arrested and imprisoned by Israeli, in addition to facing high fines and being denied access to the al-Aqsa Mosque, in occupied Jerusalem, many times for different periods of time.