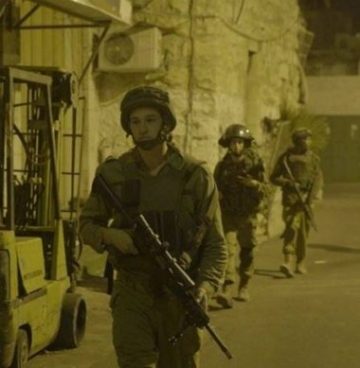 westThe Palestinian Prisoners Society (PPS) has reported that Israeli soldiers kidnapped, on Sunday at dawn, at least ten Palestinians, including six children, in different parts of the occupied West Bank, including in occupied East Jerusalem.

The soldiers also summoned five Palestinians from the refugee camp, and one from Beit Fajjar, south of Bethlehem, for interrogation at the Etzion military base and security center.

In Jerusalem, the soldiers invaded and searched many homes, and kidnapped Zayed Edkeidik, his son Ahmad, 13, and four siblings, identified as Ayham, 13, Omar, 14, and Ahmad Za’anin, 16, and Bahjat ar-Razem, 13.

The PPS said the soldiers have kidnapped 16 Palestinians, including a young woman, from Jerusalem, over the last two days.