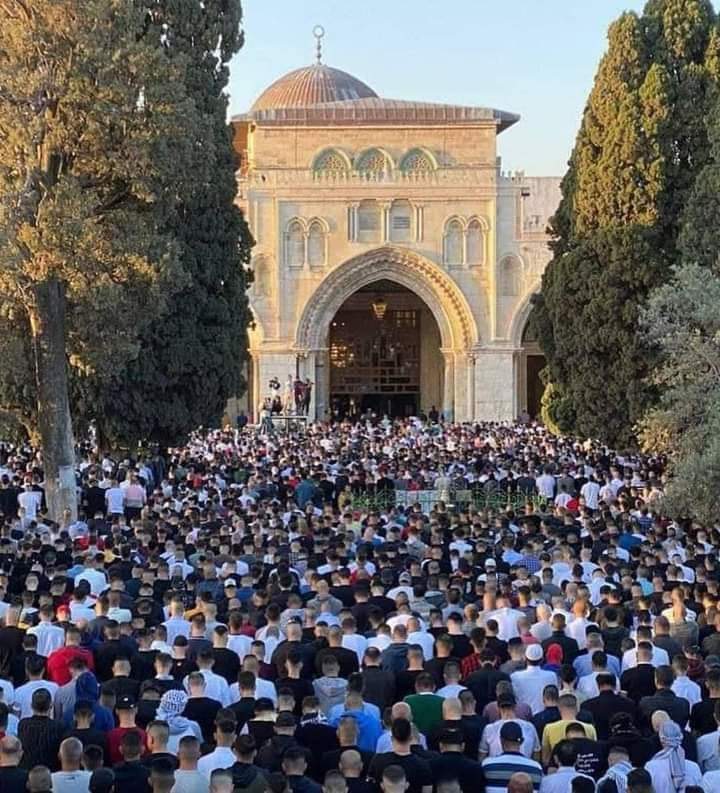 As the Israeli bombardment of the Gaza Strip continued Thursday for the fourth straight day, thousands of Palestinians in the West Bank poured into the al-Aqsa Mosque in Jerusalem to mark one of Islam’s most important holidays: Eid al-Fitr, which begins Thursday and will continue for five days.

The holiday, which is usually celebrated with gift-giving, feasts and parties, took on a much more subdued tone this year as Palestinians in Gaza continue to be besieged by Israeli airstrikes and Palestinians in the West Bank are facing down Israeli paramilitary settler attacks and forced displacement from their homes.

In Rafah, in the southern Gaza Strip Thursday morning, a new round of Israeli airstrikes left one elderly Palestinian dead. He was identified as Hammad Ayyad Al-Dabbari

Al Jazeera’s Nida Ibrahim reported Thursday, “Gaza is a relatively small piece of land with two million Palestinians – one of the most condensed areas in the world so you can imagine the impact of these targets. It is also such a closed zone the chances of hitting civilians gets very high as Palestinians can tell you from previous wars.”

Officials in the Palestinian Health Ministry in Gaza say the death toll has hit 72, including 17 minors, since the current round of violence began on Monday. Six Israelis have been killed.