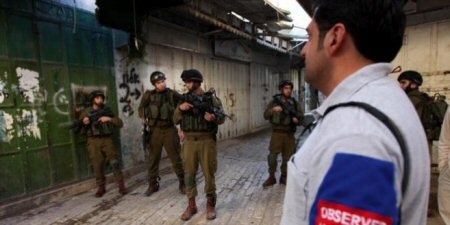 Israeli PM Benjamin Netanyahu, today, decided not to renew the mandate of the Temporary International Presence in Hebron (TIPH), which has existed since 1997  and established upon the adoption of UNSC resolution 904, which followed the massacre that took place in 1994, during the dawn prayers on a Ramadan morning, in Hebron’s Al-Ibrahimi Mosque, in which an Israeli settler went on a shooting spree inside the mosque, killing 50 worshipers.

Senior PLO official, Dr. Saeb Erekat said that, as part of their parliamentary elections, Israeli politicians are waging an immoral dehumanization campaign against Palestine and Palestinians that constitutes an imminent danger to their safety and security, Erekat said.

“The continuation of Israeli escalations, including the threat of home evictions facing several Palestinian families in Sheikh Jarrah neighborhood in occupied Jerusalem, against Palestinian men, women, children and elderly, necessitate the immediate intervention of the international community.”

Accordingly, Erekat called upon the United Nations to guarantee the safety and protection of the people of Palestine not only ensuring the continued presence of TIPH in Hebron but also to deploy permanent international presence in Occupied Palestine, including East Jerusalem, until the end of Israel’s belligerent occupation.

Erekat described the decision as an additional step towards Israel’s nullification of all signed treaties, including the Oslo Interim Agreement, adding that it further consolidates the Israeli colonial enterprise and represents one further step towards a “de jure” annexation of further areas in the Occupied State of Palestine.

“It is also a shred of further evidence that Israel is a rogue state that abhors international legitimacy and places itself above and beyond international order and the international community. With the support of the current US administration, Israel continues to incite against and violate the fundamental and national rights and freedoms of the people of Palestine and to degrade and insult the very body that unites the nations of our world, the United Nations,” Erekat said in his statement.

He added that, among other measures, this resolution also called upon the occupying power, Israel, to confiscate arms of the Israeli settlers to prevent them from committing further crimes against the people of Palestine.

“Israeli settlements have been frequently condemned as illegal by several UNSC and UNGA and a war crime under the Rome Statute. But to date, Israel has never honored neither international will nor law. Just yesterday, Benjamin Netanyahu again confirmed to the settler movement that even Israeli colonial installations, considered illegal by Israeli law, will not be removed and that the entirety of the land of historic Palestine is for the State of Israel,” the statement said, according to the PNN.

Erekat continued by referring to ongoing Israeli violations which claim the lives of Palestinians.

“Most recently, the life of Hamdi Al-Na’asan, a husband and a father of four, when Israeli settlers and soldiers attacked his village al-Mughayyir last Saturday. This tragic incident is an embodiment of how the Israeli settler movement has now become part and parcel of Israel’s political and executive leadership. It is also a testament to the terror that has been continuously waged by Israeli settlers against Palestinian villages and civilians. Such horrific reality should also imply a further escalation in Hebron now without any monitoring by the TIPH.”