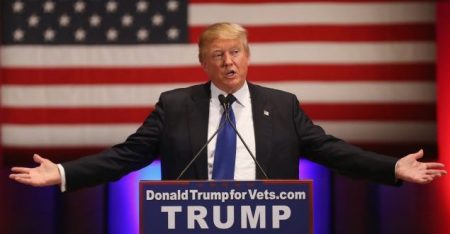 The US and Israel have been long term allies and have had an unbreakable military bond, over the years, a relationship that has always affected the Palestinian political ground. However, the reactions of Palestinian political parties to the election of Trump as president  have varied, according to the PNN.

This morning, PLO and Palestinian Authority (PA) president Mahmoud Abbas congratulated Trump on winning and expressed hopes of achieving “peace and justice” during his presidency.

In addition, PLO Secretary General Saeb Erekat said that he hopes the new administration will support the two-state solution, saying that peace and security in the region cannot be achieved unless by establishing a Palestinian state based on the 1967 borders.

Spokesperson for the PA, Nabil Abu-Rdeineh, reiterated Erekat’s statements, saying that there will only be peace with international legitimacy, which will destroy extremism and chaos.

The Islamic resistance movement, Hamas, called on Trump to reevaluate US policy towards Palestinians and work towards bringing them justice.

In a press release, the movement said that the Palestinian struggle is still ongoing because of the ongoing American bias regarding the Israeli military occupation.

Moving to the Palestinian left, member of Popular Front for the Liberation of Palestine (PFLP), Tayseer Khaled, wrote on his Facebook page that the American elections will always affect the Israel-Palestinian conflict.

“We know that Trump is relatively closer to Israel than Clinton, but we should also not  forget that Hillary, as Foreign Secretary, has always sold us lies and illusions over the years, and that Democratic Obama gave Israel a $38 billion deal for the next 10 years.

“Trump vowed to move the US embassy to Jerusalem, and does not oppose settlement expansion” adding that the political decisions regarding Palestine must be tied to the Palestinian will.

Speaking for the Popular Committee Against the Seige, PLC member Jamal Al-Khudari said that all American presidents have given unlimited support to Israel, and denied Palestinian rights.

In a press release, Al-Khudari said that past experiences with the same administrations have never presented anything to the Palestinian cause but, rather, strengthened the Israeli occupation.

“The shortest way to achieve peace and security is by giving the Palestinian people their legitimate rights and having their own state, with Jerusalem as its capital.”

Islamic Jihad movement: No American president will do good for Palestine

To its part, the Islamic Jihad movement in Palestine announced its opposition to the ongoing and unlimited American support to Israel, which is always used against innocent Palestinians.

Sheikh Khader Adnan, leader of the IJ in the West Bank, after Trump’s win, said that they do not expect anything good to come to Palestine from an American president, since their policy is alwyas the same, and the most biased towards Israel.