Palestinian Prisoners’ Center for Studies Report : 420 Arrests in July, Including 10 Women, 62 Children and the Martyrdom of a Prisoner 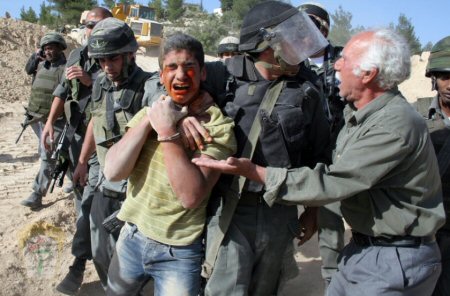 The Palestinian Prisoners’ Center for Studies (PCBS), released a report on August 1, 2019 confirming that the Israeli occupation authorities have continued to arbitrarily detain Palestinians during the past month of July. The PCBS has documented 420 cases of arrest of Palestinians during July, including 62 minors, 10 women, a deputy, and the martyr of the prisoners movement.

Riyad al-Ashqar, researcher for PCBS stated that the report documented 14 cases of arrest of Palestinians from the Gaza Strip, 4 of whom were fishermen during the course of their work in the Gaza Strip, and the arrest of 10 young men and women while crossing the separation fence in the east of the Gaza Strip.

The Arrest of Minors

Al-Ashqar affirmed that the occupation, targeted minor children with arrest and summons, 62 cases of the arrest of chlldren, including the siblings Mohammed Mazen Furcal (7) and Mahmoud Ezzedine Furcal (11), Amir Obeid (11), of Jerusalem, whom Israeli authorities interrogated.

In a serious precedent that exceeds all moral and legal standards, the occupation summoned the child Mohammed Rabea ‘Alyan (4) to interrogate him, as well as summoning Qais Firas Obaid (6) for interrogation, suspected of ‘throwing stones at police cars’.

The Arrest of Women

Al-Aqshar revealed that the Israeli occupation forces have persisted in the arrest of Palestinian women, during the July arrests, in addition to breaking into a house belonging to Shadi Sidr from Hebron, and the investigation of his daughter Angel (6), under the pretext that she had been ‘harassing the settlers’.

Fathia Sa’id Barghouthi (63), and the mother of Murad Barghouthi, was detained for at least six hours during her return to Palestine from Jordan, was interrogated during the entire period of her detention.

Alaa’ al-Bashir (23), from Qalqiliya, was arrested by the Israeli occupation forces after she was summoned for interrogation, and detained for several weeks by the Palestinian security services. Another young woman, Sheroq Mohammed Al-Badin (25), from Bethlehem, was placed under a six month administrative detention order, with no charges.

Nagham Mohammad ‘Oleyyan (16) from the town of Issawiya, in the center of Jerusalem, was arrested and released two days later, on the condition that she pay a fine of 1,000 Israeli shekels, and five days of house arrest.

In addition to the arrest of the female teen, Rouen Atef Abu Sneineh (18), at a military checkpoint near the illegal settlement of Kiryat Arba, on charges of possession of a knife, Israeli forces arrested Bara Mahmoud, from Jerusalem, Madlyn Issa, and Hayat Al-Zaghal, from Silwan, with her husband and son.

The Death of a Prisoner in Solitary Confinement

The number of Palestinian martyrs of the Prisoner Population this July, rose to 220, after the death of the Palestinian prisoner Nassar Majid Taqatqa (31), from Beit Fajjar in Bethlehem, as a result of torture and medical neglect that he suffered in Israeli interrogation centers and detention. The Israeli occupation forces arrested Taqatqa after invading his home on June 19, 2019. Occupation forces ransacked and damaged the home, and took him for interrogation. He was subjected to harsh and violent torture, and placed in severe conditions, which led to pneumonia infection, and was denied the necessary medical treatment. He was left alone, to fight the infection, in solitary confinement, until he succumbed to the infection, for which the Israeli occupation bears full responsibility.

Researcher Al-Ashqar confirmed that 21 Palestinian prisoners were on open ended hunger strikes, in opposition to their administrative sentences, in the month of July, 14 of whom suspended their strike after receiving promises to limit the administrative detention. 7 prisoners were still on strike for various periods, the longest being Muhammad Nidal Abu Bakr (22), Mustafa al-Hassanat (25), from Bethlehem, and Hotheifa Bader Halabiyya (33), in occupied Jerusalem, entering their second month in a row, their health situations deteriorating significantly.

Edited for IMEMC by Ali Salam