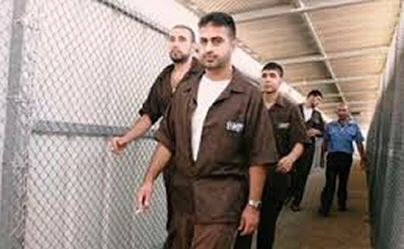 In the month of April, each year, Palestinian detainees, the Palestinian people, and the world mark the International Day of Solidarity with Palestinian Prisoners.

Prisoners’ Day has been commemorated since 1974 by the Palestinian National Council, when the first Palestinian prisoner, Mahmoud Hijazi, was freed in a prisoner exchange with the Palestinian Resistance. 17 April is a day of protests, rallies, marches, forums and more to commemorate the struggle of Palestinians imprisoned in Israeli occupation jails and demand their freedom.

The occasion comes, this year, with nearly 7,000 Palestinian prisoners trapped in Israeli prisons, including 69 women, 400 children and 450 administrative detainees held in 22 Israeli prisons and detention centers in inhumane conditions.

About 400 children under the age of 18 are currently held in Israeli prisons. Dima Al-Wawi, 12, and Shadi Farrah, 12, are the youngest, the Palestinian Prisoners’ Society said.

The number of administrative detainees currently confined to Israeli jails is 750, according to Al Ray Palestinian Media Agency; 700 are patient prisoners, including 23 prisoners languishing in Ramleh Prison Clinic, most of them receiving only painkillers and anesthetics.

In 2014, Israeli occupation authorities re-arrested more than 70 prisoners who were freed in the Shalit prisoners swap deal, most notably Nael Barghouti, who spent 34 years in Israeli jails.

Two prisoners, Jaafar Awad, 22, from Hebron, and Fadi Ahmad Al-Darbi, 30, from Jenin, died shortly after their release, due to the deliberate medical neglect policy, bringing the number of the slain, from the prisoners’ movement, to 207.

Facts and testimonies of detainees assure that the vast majority of those who have experienced incarceration were subjected to a form of physical or psychological torture; abuse and moral insult.

Within the Israeli restrictions imposed on the Palestinian prisoners, the Israeli Knesset has approved a number of racially biased policies, such as the force-feeding of prisoners on hunger strike, in 2015. Israeli courts have also been compelled to sentence stone-throwers with severe punishment, ruling a minimum of two years and a maximum of four years imprisonment.

Marking Palestinian Prisoners’ Day, many national and official bodies have launched conferences, ground-events, and demonstrations to support the rights of Palestinian prisoners trapped behind the Israeli bars.