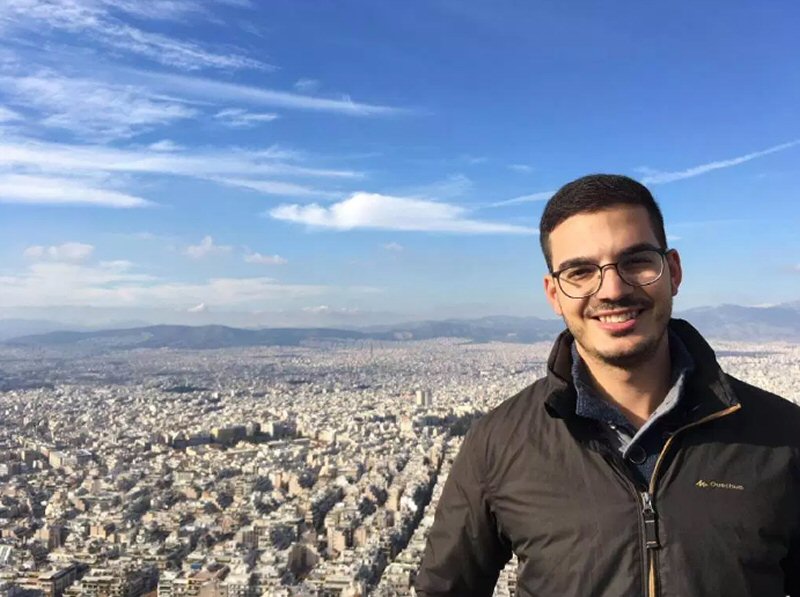 Laith Abu Zeyad, a longtime Palestinian prisoners’ rights advocate and a staff member with Amnesty International in occupied Palestine, was one of over 40 Palestinians – mostly youth – seized on Wednesday night, 13 June, during a march to lift the Palestinian Authority’s sanctions on Gaza. He was subject not only to political detention but to physical torture and abuse by PA security after he attended the march as an observer with Amnesty.

“Then I saw men in civilian clothes, I think they were security forces. They were taking a demonstrator and beating him on the way… and they were punching and kicking while dragging him away towards Manara,” said Abu Zeyad in a testimony provided to Samidoun Palestinian Prisoner Solidarity Network.

“Once I saw this I took out my phone and started filming, but as soon as I started…around 10 to 20 seconds, one man in civilian clothes attacked me and pushed me against the metal gate of a closed shop…Pushed me with both hands and then he choked me with both hands. He was yelling at me asking why I was filming. He did not identify himself and did not give me the chance to say anything.

“I heard [a colleague] try to explain that we are an organization: that we are Amnesty International and that we are here to document and we did not do anything. He then put me in chokehold and started pulling me towards Manara; he put me in chokehold with his right arm. I tried to resist getting dragged but there was another man in civilian clothes who was pushing me and I felt slaps on my neck.He was holding me really tight, I felt suffocated, and I was trying to tell him that and to explain that I did not manage to film anything, and that I work for an international organization, and that I cannot breathe.”

In the course of his advocacy, Abu Zeyad has always worked to end the abuses of the Palestinian Authority while achieving justice and freedom for the over 6,000 Palestinian prisoners held in Israeli prisons. In particular, PA rights violations are frequently part of the Authority’s “security coordination” with the Israeli occupation, in which it shares information about Palestinians with the Israeli occupier and targets Palestinian resisters for arrest and interrogation. The case of Basil al-Araj, first arrested by the PA and later assassinated by Israel after his release, drew widespread and renewed attention to the threat security coordination poses to the Palestinian people.

The marches on Wednesday evening in Ramallah came as part of an ongoing campaign organized by Palestinian youth activists demanding the Ramallah PA under PA President Mahmoud Abbas end its sanctions on Palestinians in Gaza, including cutting the salaries of public workers, delaying medical transfers and refusing to pay for utilities such as electricity. These sanctions operate hand in hand with the Israeli siege on Gaza and its enforcement by international imperialist powers like the United States and European Union as well as local Arab regimes.

As the protesters called for Palestinian unity and an end to sanctions on Gaza – especially as Palestinians in Gaza face death by Israeli bullets and snipers as they march in the Great Return March and devastating sanctions that have magnified poverty and unemployment – they met with severe attacks by PA security forces. These security forces, it should be noted, are funded and trained by the United States, Canada and the European Union.

After Abu Zeyad was seized by the PA security, the abuse continued:

“At the entrance of the parking lot I saw it was blocked by security forces in uniform and others in civilian clothes. They opened the way for him and he took me to an area where two police mini-buses were parked and a police van to the left of the entrance.

“He pushed me facing sideways on the front of the van and proceeded to punch and slap me on the face and upper body, I maybe can count four strong punches and many slaps, and I was asking him to stop the beating and trying to explain that I work with Amnesty International; that is when he took my phone from my side pocket and gave it to the police officer.”

Abu Zeyad was pushed and shoved into a minibus filled with detained demonstrators before being moved to a separate bus. Soon, that bus was also filled with more detainees. “The first man they brought in, who I knew…I saw 3 police officers in uniform beat him outside the bus, punches and slaps, and then kicked him in, and he sat in the back with me, I was on the right he was on the left. We did not speak.”

Abu Zeyad noted that one of Basil al-Araj’s comrades, Haitham Siyaj, who was imprisoned with him in Palestinian Authority prisons and then subjected to lengthy administrative detention – imprisonment without charge or trial – was also subject to violent abuse by PA forces.

“Then the most violent incident I witnessed, when they brought in 21 year old Haitham Siyaj: what I saw was that there were 4 police men beating someone outside with batons, he was without a shirt/ I heard loud screaming, and a woman was trying to shout at them to leave him, saying that he is her relative. They pushed the woman away, and then the man was brought into the bus, I recognized he was Haitham Siyaj. They pushed him on the floor, he landed on his face, and then two police officers in uniform started beating him with batons on his back.

“That is when we, other detainees, started yelling at the police officers to stop the beating, so they gave him his shirt back and went away, I could see he was in agony.”

Abu Zeyad also detailed the beating and pushing of a 17-year-old corn seller on the Ramallah streets, who said that he was working at his cart selling grilled corn to passers-by when he was attacked and seized by the police. He also noted that an American journalist was among those detained: “He kept telling the police officer that he was an American journalist, and showed him his passport, but the police said “I don’t care” and took his passport away by force.”

However, after they were taken to the National Security Forces building in el-Bireh, the detainees with foreign passports or Israeli ID cards were released first, while the detainees with Palestinian IDs were denied the right to make phone calls or request a lawyer. During Abu Zayed’s interrogation – after he was identified once more as an Amnesty staff member due to questions from his supervisor, who had arrived at the security building asking about him – he was surrounded by 15 men in a room labeled “Military Intelligence.”

“One of the officers at the centre started asking the same questions…if I was ever arrested before by the PA or Israel, if I know if I have any security ‘ticks,’ He also asked me about my salary and whether I know any of the protest organizers. I explained that I was there at the protest to document and that I was arbitrarily arrested and described the beating I took. But he did not comment. He asked if I filmed anything. I said I was about to but I was attacked before I could capture anything. There was a number of cell phones on the tables, he asked if my phone was one, I identified mine, so he ordered a man in civilian clothes to take me outside and search through my phone….Outside, the man, ordered me to open my phone and then the photo gallery, he saw the last few seconds of a video I took and he deleted it and gave me back my phone.”

Abu Zeyad’s story was likely repeated over 40 times over that evening as part of the repression of a Palestinian protest to stand with Gaza and end the PA’s penalties and sanctions that are only intensifying the effects of the Israeli siege on the Palestinian population. Muhannad Karajah, a Palestinian lawyer with Addameer, spoke with Hadf News about the situation of those detained, saying that there were 56 people detained overall and that he was working on the cases of 46 people. Among those detained included a number of former Palestinian prisoners in Israeli jails and relatives of martyrs.

Samidoun Palestinian Prisoner Solidarity Network expresses its support and solidarity with the rising movement against the sanctions on Gaza and reiterates its call to end Palestinian Authority security coordination with the Israeli occupation.