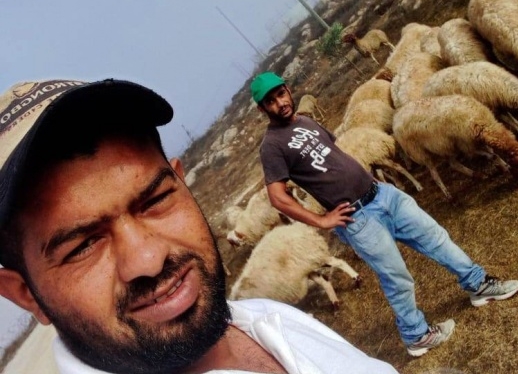 Two Palestinian brothers were herding sheep on their land in the Lasifer area east of Yatta, in the Hebron District of the southern West Bank, when they were assaulted by armed paramilitary Israeli settlers, who attacked the two brothers and beat them.

The paramilitary settlers had invaded the Palestinian farmland under the protection of Israeli soldiers. After beating the two brothers, the paramilitary forces called on the official Israeli army soldiers to attack the brothers further. The soldiers abducted the two men, taking them to an Israeli military prison base, and leaving their sheep unattended on the hillside.

The two shepherds were identified as Othman and Abbas Abu Qbaita, 37 and 34 years old. They have lived on and farmed and grazed sheep on this land for generations – but the site has been targeted by Israeli paramilitary colonizers who have decided to take it over by force, and are trying to force the indigenous Palestinian owners off their land by force.

Fouad Al-Amour, coordinator of the Committee for Protection and Resilience in the mountains of southern Hebron, told reporters from the Ma’an News Agency that the Abu Qbaita family had filed papers in court to stop the illegal theft of their land by armed paramilitary colonizers. Just last week, an Israeli court confirmed their ownership of the land.

The colonizers have been trying to gain control of this land by force for months now, as it is located in an isolated area near ​​the Israeli annexation and expansion wall east of Yatta.

One of the brothers, Othman, had survived an assassination attempt last week by some of the armed paramilitary Israeli settlers. All of these attacks, according to Al-Amour, are aimed at forcing the family to leave their lands in favor of expanding Israeli colonial settlements in that area.

All Israeli settlements in the West Bank are considered illegal under international law, and a violation of signed agreements including the 1994 Oslo Accords, and the 1957 Fourth Geneva Convention. Despite signing these agreements, the Israeli government has never adhered to them, and has transferred hundreds of thousands of its citizens to live in illegal colonies on stolen Palestinian land in the West Bank.