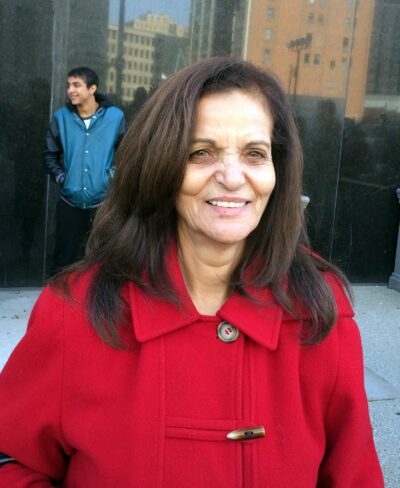 On 1 October 2021, Al-Haq and Addameer Prisoner Support and Human Rights Association (Addameer) sent letters to State Representatives calling on them to intervene to prevent Ms. Odeh’s unlawful detention and mistreatment and urging their attendance at Ms. Odeh’s next legal hearing on 4 October 2021, in order to ensure fair standards of legal proceedings.

Ms. Shatha Odeh Abu Fannouneh, 60 and mother of three, a human rights defender and the Director of the Health Work Committees (HWC), was forcibly and arbitrarily arrested at her house in Ramallah by the Israeli Occupying Forces (IOF) on 7 July 2021, at around 2:00 am. She was then forcibly taken to Ofer Israeli Military Camp in Ramallah, where a nine-hour interrogation ensued on the day of her arrival. Next, Ms. Odeh was moved to Hasharon Prison, located outside the Occupied Palestinian Territory (OPT), in violation of international humanitarian law. Since 27 July, Ms. Odeh has been held in Damoun Female Prison in Haifa.

The forced and arbitrary arrestation and detention of Ms. Odeh constitutes breaches of several Israel’s obligations under international human rights and international humanitarian law, notably the prisoners’ right to remain in the occupied territory during all stages of detention (Article 76 Fourth Geneva Convention related to the Protection of Civilian Persons in Time of War) and the prohibition of forcible transfer of civilians (Article 49 Fourth Geneva Convention). Holding Ms. Odeh in Israeli prisons outside of the OPT both infringes on her right to maintain contact with family and defense counsel, as heavy restrictions on Palestinians’ free movement imposed by Israeli authorities preclude the ability of her family to visit, and constitutes forcible transfer of civilians.

The conditions of detention of Ms. Odeh also amount to violations of the Occupying Power’s obligations to provide adequate medical care (Article 76 Fourth Geneva Convention) and Ms. Odeh’s right to human dignity. Indeed, Ms. Odeh was denied access to emergency medication for the first eight days of her detention and has been subjected to degrading and inhumane conditions of detention which induced her to lose 9 kilograms of weight thus far. Finally, the continuous unjustifiable detention of Ms. Odeh without knowledge of the charges levelled against her is a violation of her right to a fair trial and due process, protected by Article 14 of the International Covenant on Civil and Political Rights (ICCPR) and Article 10 of the Universal Declaration of Human Rights.

In light of the above, Al-Haq and Addameer urged the state representatives to:

i. Call on the Occupying Power, Israel, to immediately release Palestinian detainee Ms. Odeh, whose health is compromised, and guarantee her right to liberty and freedom from arbitrary arrests and detention;

ii. Call for your attendance at the next legal hearing on 4 October 2021, at 2 pm at the Offer Military Camp, in order to ensure fair standards of legal proceedings;​_

iii. Call on Israel to put an end to the systematic and ongoing practice of targeting of Palestinian civil society organizations, including the HWC and intimidating Palestinian human rights defenders, including Ms. Odeh, contrary to international law;

iv. Call for the return of Ms. Odeh’s property, including her mobile phone and car, unlawfully, confiscated without a requisition order and in the absence of the requisite ‘military need’ or ‘military operations’ provided for under Articles 52 and 53 of the Hague Regulations (1907); and

v. To condemn and call on Israel to end its inhumane practices of prolonged drives and transfers of prisoners between prisons, in confined spaces for hours in conditions causing ‘intense suffering’.