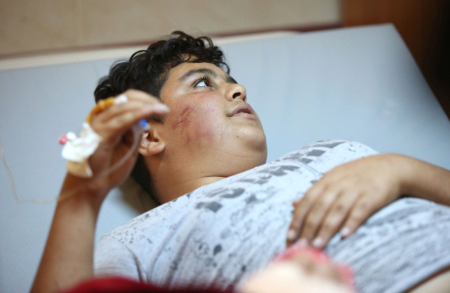 Even though Osama Jamil Daghlas is only 16 years old, this did not prevent a group of 20 grown Israeli settlers from attempting to lynch him. According to the boy, he survived only because the settlers thought that he was dead and left him alone.

Speaking about his nightmarish ordeal from the day before from his hospital bed in Nablus, where he is getting treatment for multiple injuries to the head, the stomach, and the upper and lower parts of his body as well as back pain, Daghlas said that he was playing with his cousin Salah in the open fields near his village of Burqa, north of Nablus, when a group of 20 settlers attacked them.

He said they became scared and ran away, but that the setters caught up with him while Salah was able to get away.

“The settlers first threw rocks at me and one hit me in the head and I fell to ground, unconscious,” he said, according to WAFA.

“But, this was not enough for them. After that they started to kick me and beat me up all over my body. Then they dragged me across the field for about one kilometer heading to their settlement at the top of the hill. My clothes were all torn and when we got on top of the hill, they pushed me and let me roll down the hill toward the valley,” said Daghlas who was still in pain from the assault.

When Daghlas attempted to get up and walk back to his village, which was only 200 meters away from where he was, the settlers threw stun grenades at him. He fell and hit his head on a rock.

Daghlas does not remember what happened after that, but found himself in the hospital when he woke up again.

According to his father, Jamil, a shepherd found him unconscious with his cloths torn and came to inform the village people, who rushed to the boy and took him to hospital.

He said his son was most likely saved because the settlers thought he was dead and therefore left him alone.

Head of the emergency unit at Rafidya hospital in Nablus, Abdul Karim Hashash, said Daghlas was brought to the hospital on Wednesday afternoon, suffering from multiple injuries to the head, belly and the limbs. He was unconscious before his arrival to hospital. He also had cuts on his back and lower and upper parts of  his body.

Hashash said Daghlas received first aid and underwent several tests to make sure he was okay, explaining that he was getting better and could be sent home soon.

This is not the first time Israeli settlers have attacked Burqa residents, said Jamil Daghlas. There have been many similar attacks, including throwing rocks at homes, attacking shepherds and destroying cars.

The Israeli army, which is in control of that area, has not done anything to stop the settlers, he said.