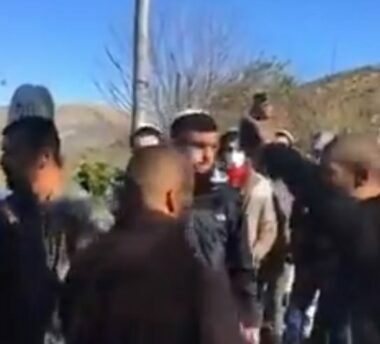 Palestinian villagers of the al-Lubban ash-Sharqiya village, south of the northern West Bank city of Nablus, managed to foil an attack by a group of illegal Israeli colonists, who attempted to invade their community.

The WAFA Palestinian News Agency said the residents noticed the colonists gathering near the entrance of the village, before they started marching towards the community, but the Palestinians gathered in large numbers and foiled their attempted invasion.

WAFA added that a scuffle took place between the villagers and the invading colonists, before Israeli soldiers arrived at the scene, and also attacked the Palestinians, and ensured the retreat of the colonists.

The al-Lubban village contains an archaeological site that was built during the Ottoman era, and includes a spring that provides the village with freshwater, while Israeli colonists have, for many years now, been trying to occupy it.

The Palestinians in the village installed gates and rehabilitated the site before Israeli bulldozers demolished the gates and walls around it.