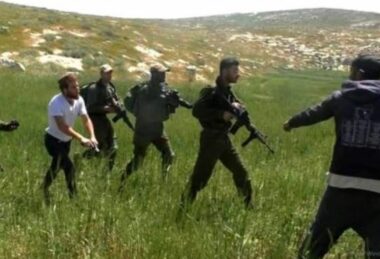 Palestinian villagers from Wad Fukin, west of Bethlehem, south of occupied Jerusalem in the West Bank, managed to foil an attack by a group of illegal Israeli colonists targeting their lands.

Resident Mostafa Sokkar said dozens of colonists attempted to invade the al-Miswana agricultural area, located between Wad Fukin and al-Jab’a villages before the locals intercepted them and forced them to leave.

Sokkar added that the colonists were trying to cut and uproot trees, as part of their attempts to install a new outpost on the Palestinian lands.

He also stated that the colonists retreated to the surrounding hills, but did not leave the area, which raises fears among the Palestinians of a new pending attack.

Israeli soldiers attacked the Palestinians and did not attempt to remove the invading colonists.