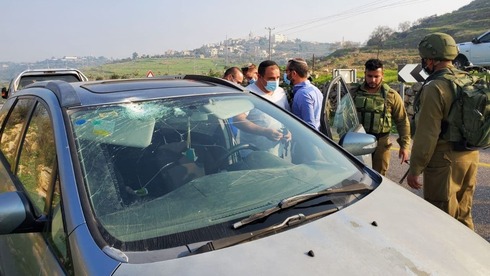 An Israeli settler was injured with a stone, on Sunday, as she was driving through the central occupied West Bank, Israel’s Y-Net News reported.

The stone, thrown by unidentified individuals, struck the windshield of the woman’s car when she was driving, with her two children, on Route 465, near Deir Nitham, north of Ramallah, near the illegal Halamish colony.

The children in the vehicle were uninjured, and the woman was struck in the head, and was described as “conscious” and “stable” according to paramedic Uri Gavriel, who helped transport the woman to Sheba Medical Center.

“We provided initial medical care that included bandaging her wounds and stopping the bleeding and evacuated her in an ambulance in stable condition.”

The female settler, was noted to be the wife of convicted murderer, Jack Teitel, a US Israeli immigrant, serving two life sentences for the killing of 2 Palestinian men in 1997.

According to the the latest United Nations Office for the Coordination of Humanitarian Affairs report, “Eight Palestinians, including three children, were injured and at least 740 Palestinian-owned trees and saplings were damaged by perpetrators believed to be Israeli settlers,” while “Two Israelis were injured and 17 Israeli-plated vehicles were damaged while travelling on West Bank roads by perpetrators believed to be Palestinians, according to Israeli sources.”