Palestinian Writer Released from Prison after Finishing Sentence Over Poem 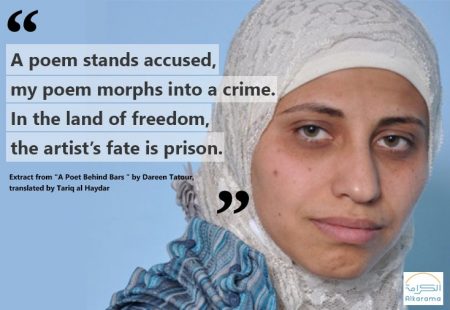 Israeli authorities released, on Thursday, Palestinian writer Dareen Tatour, aged 36, after completing her five-month prison term for a poem she wrote, and which Israel considered to incite to violence.

Tatour, from the town of Reineh, near Nazareth, in northern Israel, was detained in October of 2015, after she published a poem on social media entitled, “Resist my people, resist,” and included with it pictures of young Palestinians confronting heavily armed Israeli soldiers with stones and bottles.

After being held until January 2016, she was released and placed under house arrest until she was sentenced, in August 2018, to five months in prison.

After serving two months in prison and counting the three months she had earlier spent in jail, after her initial arrest, Tatour was freed, WAFA reports.