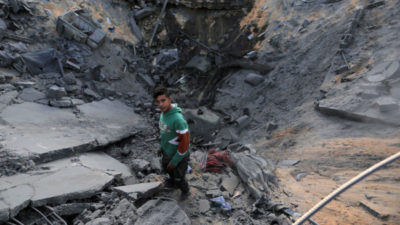 November 16, 2019—The Argentina and Uruguay national football teams are planning to go ahead with a “friendly” match in Israel, despite Israel’s recent attack on Gaza that killed at least 34 Palestinians.

The match is set to take place Monday, November 18, at Bloomfield Stadium in the ethnically cleansed Palestinian city of Jaffa.

Stephanie Adam of the Palestinian Campaign for the Academic and Cultural Boycott of Israel (PACBI) said: As the latest episode of Israel’s criminal bombing campaign is put on hold and Palestinians in Gaza again mourn the dead, Argentina and Uruguay plan to go ahead with a “friendly” football match.

The match should never have been planned in the first place. Palestinians live in a constant state of oppression and denial of basic rights due to Israel’s decades-old regime of military occupation and apartheid.

In just two days, Israeli airstrikes in Gaza killed 34 Palestinians, including eight children. Israel has kept Palestinians in Gaza under a life-strangling siege for more than 12 years while it repeatedly bombed the confined civilian population in Gaza, killing thousands. The United Nations predicts that Gaza will be unlivable by the year 2020. What kind of security do Palestinians have?

Thousands worldwide, especially in Montevideo, Buenos Aires and Barcelona, have raised with the football associations and players the right of Palestinians to live in safety and freedom.

Like apartheid South Africa in the past, Israel is no place for international sporting, cultural or academic events as long as it continues its apartheid regime and crimes against the Palestinian people.

In 2018, Argentina canceled a “friendly” match in Jerusalem following months of BDS campaigning.

Israel’s Comtec Group, which has clients in illegal Israeli settlements, was the organizer of the failed Argentina friendly as well as the Argentina vs Uruguay match.

Sylvan Adams, a Canadian billionaire real-estate magnate and self-proclaimed ambassador for Israel, is reportedly covering a significant sum toward the costs of organizing the Argentina vs Uruguay match. Adams has stated that he is dedicating the current chapter of his life to “the promotion of what I call ‘normal Israel,’” to deflect attention from Israel’s violations of Palestinian human rights and international law.

Adams and Comtec have teamed up to bring events to Israel before, including Madonna to the 2019 Eurovision Song Contest, the 2018 Big Start of the Giro d’Italia cycling race and a failed attempt to bring the 2019 Miss Universe Pageant to Israel.

There was never any doubt that this match was political. Argentina and Uruguay have decided to cross the Palestinian nonviolent picket line. The “friendly” match will allow Israel to use an international sporting event and the prestige of championship athletes to sports-wash its criminal policies of ethnic cleansing, siege, repeated military assaults on Gaza, demolition of Palestinian homes, illegal settlement construction and apartheid walls.

Top Gaza Premier League club Khadamat Rafah wrote to Argentina and Uruguay urging both teams “not to allow the beautiful game to be used as cover for gross human rights violations.” Israel denied Khadamat Rafah permits to travel for the 2019 Palestine Cup, forcing cancellation of the Palestinian football championship.

Balata Football Club, from the occupied West Bank refugee camp of the same name, also urged Argentina and Uruguay to cancel the match in Israel, recalling the crucial role that sports boycotts played in ending apartheid rule in South Africa.

At a Barcelona FC training session, Catalan civil society groups made personal appeals to players Lionel Messi and Luis Suárez, who play for Argentina and Uruguay respectively, not to join the match, recalling Maradona’s famous phrase, “the ball can’t be tarnished” (“La pelota no se mancha”). They asked, “Would you have gone to play in apartheid South Africa?” Protests at the football associations in Montevideo and Buenos Aires received widespread media attention.

Dozens of civil society groups, trade unions, human rights organizations and sports fan clubs in Argentina and Uruguay called on their national teams to cancel the match in Israel.

– Gaza is home to the Palestinian Amputee Football Association, founded in March 2018. It now has seven teams and 80 players, most of whom lost limbs due to Israeli army sniper fire at peaceful protesters participating in the Great Return March demanding basic human rights. For the amputees, playing football is a form of resistance and a way to continue to play their beloved game.

– Argentina was initially scheduled to play against Paraguay in Bangladesh on November 18. When talk of the match in Israel on November 19 surfaced, the president of the Paraguay Football Association stated, “When you sign a contract, you validate the contract. That contract must be respected. In the event it is not respected, we will take appropriate action.” Days later, on October 28, Paraguay announced the match with Argentina had been canceled.

– The date for the Argentina vs Uruguay match in Israel was confirmed by both national teams for November 19. The Israel Football Association, which includes teams in illegal Israeli settlements built on Palestinian land in violation of international law, complained that the date coincided with Israeli national team matches. The Argentina Uruguay match date was then changed to November 18.

– The Argentina vs Uruguay match is set to be played in Bloomfield Stadium in Jaffa (Yafa), a once prosperous and cosmopolitan Palestinian port city and one of more than 500 Palestinian villages and cities ethnically cleansed of its indigenous Palestinian residents during Israel’s establishment in 1948 on the ruins of the Palestinian homeland.

The Palestinian Campaign for the Academic and Cultural Boycott of Israel (PACBI) was initiated in 2004 to contribute to the struggle for Palestinian freedom, justice and equality. A key part of the BDS movement, PACBI advocates for the boycott of Israeli academic and cultural institutions, given their deep and persistent complicity in Israel’s denial of Palestinian rights as stipulated in international law. Visit PACBI at https://bdsmovement.net/pacbi and follow us on Twitter @PACBI