Argentina and Uruguay Players Need to Hear From You: Cancel “Friendly” Match in Apartheid Israel 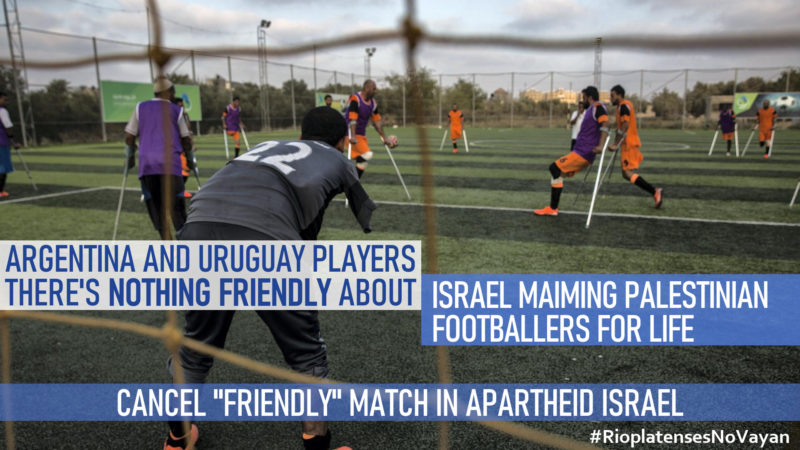 The Argentina and Uruguay national football teams are planning a “friendly” match in apartheid Israel on November 18, ignoring Palestinian appeals and as Israel carries out attacks on besieged Gaza.

For Israel, this is about using the beautiful game to sports-wash its crimes of occupation and apartheid against Palestinians, including athletes.

For the Football Associations, this is clearly about the money. Argentina even canceled an already scheduled friendly match with Paraguay to make the match in the ethnically-cleansed Palestinian city of Jaffa happen.

We need to reach the players. They have the power and the influence to stop this match.

Players need to know they should be standing with Palestinian amputee footballers in Gaza who lost limbs to Israeli army sniper fire, instead of entertaining apartheid Israel.

Players need to know they should be standing with the families of Palestinian children killed by Israel while playing football, instead of sports-washing Israel’s military occupation and ethnic cleansing.

Players need to know they should be standing with Palestinian athletes deprived by Israel of freedom of movement and the chance to compete, instead of covering up Israel’s siege, illegal settlements and apartheid walls.

Tell Lionel Messi and Luis Suárez:
Don’t allow your teams to be complicit in sports-washing Israel’s attacks on Palestinian sports —

Last week, human rights supporters in Barcelona went to the grounds where players Lionel Messi and Luis Suárez were training to make a personal appeal to them.

Civil society groups in Argentina and Uruguay are mobilizing this week to convince the teams to stand with Palestinian footballers in their struggle for the right to live and play.

Let’s speak to the players themselves. Let them know that football fans across Palestine and the world want to see sports used to empower and promote tolerance, not to cover up gross human rights abuses.