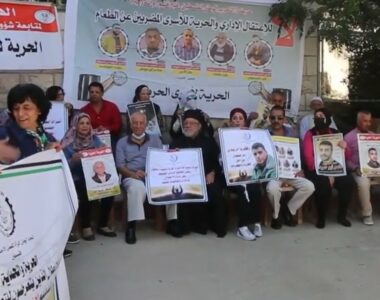 Hundreds of Palestinians held Monday, various sit-in protests in front of the International Committee of the Red Cross (ICRC) offices in various parts of the occupied West Bank, in solidarity with Palestinian detainees in Israeli prisons, and demanding ending the escalating violations against them.

The sit-in protests were organized by various Palestinian national and Islamic factions, and many institutions that defend the detainees and fight for their rights.

The protesters called on the ICRS to intervene and provide the needed protection to the Palestinian detainees in Israeli prisons, especially the six detainees who were captured after managing to escape from Gilboa’ high-security prison and are currently subjugated to serious violations, including torture.

They also called for pressuring Israel into ending its illegal and arbitrary Administrative Detention policies, holding hundreds of detainees captive without charges or trial, and to ensure that the ailing detainees, especially those with life-threatening medical conditions, and the hunger-striking detainees, receive the needed specialized medical care.

It is worth mentioning that the Palestinian political prisoners in Israeli jails, detention facilities, and interrogation centers, are facing seriously escalating violations, especially after the six detainees managed to escape from Gilboa’.

Many of them are in solitary confinement, in addition to contact attacks against them in their rooms and cells, in addition to being repeatedly transferred to various prisons and detention centers.

They are also denied the right to visit with their families and are not allowed to buy food from the prison canteen.