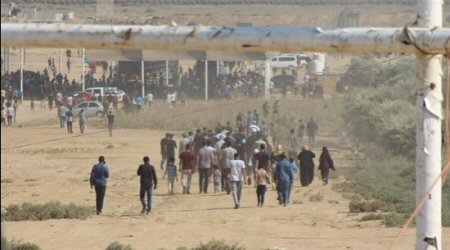 At least 35 Palestinians were injured by Israeli forces, during protests at the eastern borders of the besieged Gaza Strip, on Friday.

The Palestinian Ministry of Health in Gaza reported that a total of 35 Palestinians were injured until 5:00 p.m. Friday, 20 of whom were transferred to hospitals for treatment, including 15 injured with live ammunition.

The Israeli army opened fire and launched tear-gas bombs at protests near the return camps of eastern Khan Younis, in the southern Gaza Strip, injuring several protesters, including an 11-year-old boy.

A Ma’an reporter said that thousands of Palestinians headed to return camps alongside the eastern borders of Gaza on the 27th Friday of “The Great March of Return”.

Additional Israeli forces were deployed along the borders, as protesters launched several flaming kites and balloons.

“The Great March of Return” protests were launched on March 30th by thousands of Palestinian civilians in Gaza — which suffers from a decade-long Israeli siege — who took to the borders to demand their right of return as refugees, to their original homelands, now in present-day Israel.